Today is the Feast of St Raymond of Penyafort 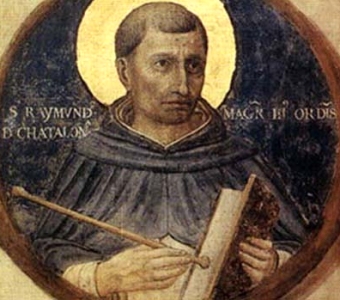 I'm quite sure that the patron of Canon Lawyers would condemn the scenes at Evreux! I don't know whose Feast it is in the Latin Rite calendar but anyway, Happy Feast Day, Fr Ray!

St. Raymond Of Penyafort Raymond was born between 1175 and 1180 in a little town near Barcelona, Spain. He was educated at the cathedral school in Barcelona and became a priest. Raymond graduated from law school in Bologna, Italy, and became a famous teacher. He joined the Dominican order in 1218. In 1230, Pope Gregory IX asked this dedicated priest to come to Rome. When Raymond arrived, the pope gave him several assignments. One duty was to collect all the official letters of the popes since 1150. Raymond gathered and published five volumes. He also took part in writing Church law.

In 1238, Raymond was elected master general of the Dominicans. With his knowledge of law, he went over the order's rule and made sure everything was legally correct. After he had finished, he resigned his position in 1240. Now he could truly dedicate the rest of his life to parish work. That is what he really wanted. The pope thought of making Raymond an archbishop, but Raymond refused. He asked to return to Spain and he did. He was overjoyed to be in parish work. His compassion helped many people return to God through the sacrament of Reconciliation. During his years in Rome, Raymond had often heard stories of the difficulties that missionaries were having.

They were trying hard to reach out to the non-Christians of Northern Africa and Spain. To help the missionaries, Raymond started a school that taught the language and culture of the people to be evangelized. Also, Father Raymond asked the famous Dominican, St. Thomas Aquinas, to write a booklet. This booklet would explain the truths of faith in a way that nonbelievers could understand. (We celebrate the feast of St. Thomas on January 28.) Raymond lived nearly one hundred years. He died in Barcelona on January 6, 1275. He was proclaimed a saint in 1601 by Pope Clement VIII. This pope declared him the patron of Church lawyers because of his great influence on Church law. May we become people of compassion and understanding for those whom we serve.
at January 07, 2010

In Latin Rite HE is anyway 23 of January: