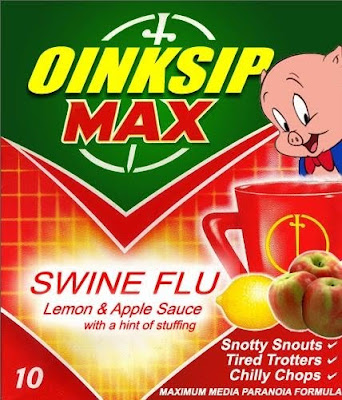 According to the Daily Mail

The swine flu outbreak was a 'false pandemic' driven by drug companies that stood to make billions of pounds from a worldwide scare, a leading health expert has claimed. Wolfgang Wodarg, head of health at the Council of Europe, accused the makers of flu drugs and vaccines of influencing the World Health Organisation's decision to declare a pandemic.

This led to the pharmaceutical firms ensuring 'enormous gains', while countries, including the UK, 'squandered' their meagre health budgets, with millions being vaccinated against a relatively mild disease.

Concerns that this scare was cooked up like a builders breakfast have been heightened by the news that Sir Roy Anderson, a scientist who advises the Government on swine flu, also holds a £116,000-a-year post on the board of GlaxoSmithKline. GSK makes anti-flu drugs and vaccines and is predicted to be one of the biggest beneficiaries of the pandemic. Confirmation, then, if ever it were needed that our pharaceutical companies and Government are about as trustworthy as a sex-addicted hypnotist in a room full of supermodels.
at January 11, 2010

And of course the HateMail had nothing to do with any of the scare stories. No, not them.