Blessed are the Poor 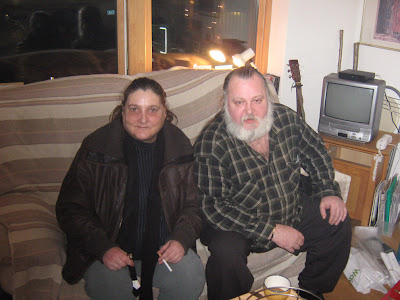 They came over for a cup of tea yesterday and helped me do the sandwiches for the Soup Run. It usually takes me an hour and a quarter for 4 loaves of cheese, pickle and salad sandwiches. George is a former chef, but is Diane's permanent carer now. It took just 15 minutes to do it with three people. It was like a little team, a chain. They enjoyed doing it, knowing that the sandwiches were going to feed the hungry, so they said they would like to come round every Wednesday and do it.

I've got quite a few friends who are not living on benefits, who are not poor, who are not unemployed, who I've asked if they'd like to help me to do sandwiches as its quite a big job on your own but nobody really wants to. George and Diane, on the other hand, wanted to help and want now to make a commitment to it, knowing they can help to do it at my place. The poor have understanding of what it is like to be poor, to have to beg or borrow, to be in need and when they are in receipt of generosity, want to give, whereas so many rich do not want to give. When the poor give, they give in abundance as well, whereas the rich scrimp and save.

Diane had a bad experience once when she knocked on a Priest's door asking for help a long time ago as she was going through a rough time and I think that put her off the Catholic faith, even though she says she always prayed to Our Lady and Our Lord from an early age, more then than nowadays. Without saying too much, she has been through a lot in her life and so has George but they are fighters, survivors. Diane says she'd like to come to Church and asked last night if Fr Ray would baptise her, since she never received that when she was a baby. George is a Catholic who hasn't been to Mass since he was in his late teens, early 20s. Perhaps this might be a re-awakening of his Catholicism. We're going to go to Mass together at St Mary Magdalen's on Sunday and then come back to mine for a roast, which George, the ex-chef, is going to cook lamb. Can't wait! Perhaps some others from St Mary Magdalen's might like to join us, who knows?

Strangely, I didn't know George was Catholic until last night and I was overjoyed to hear that Diane wants to get baptised and convert! Few things could possibly give us more joy than that! She has been through so much and still struggles. The Lord has brought us together, the Lord defends and upholds the poor and the poor, unlike the prudent and learned rich, want the Gospel. They know that God loves them! They, like us, may not know what the Kingdom of Heaven looks like, but they know how it operates! I don't usually put pictures of my friends on my blog but in George and Diane and our friendship, God is doing good things! May God be praised!

We listened to this song a lot. Mesmerising videos Massive Attack did! This is deep s**t!

That roast is tempting!

I used to do the evening soup run in B/Ham City Centre many years ago.