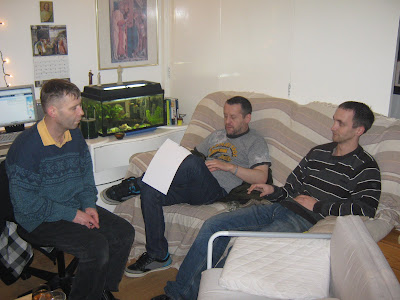 Had a good night last night. Mister 'P' came over and Daryl, (browsing a calendar of Pope Benedict XVI!) and his friend Andy came over a bit later on. I love cooking for people, as I'm a bit rubbish at doing it for myself. I have rediscovered a fondness for chicken kievs. Andy is really interested in the Catholic Faith and we had a big discussion about the plethora of churches you could join. Obviously, I told him which Church was the One True Church and he might come along to the Latin Mass on Friday. I think that the low Latin Mass is a gentle and kind introduction to the Catholic Faith, as it is not too 'in your face'. Non-Catholics would understandably feel intimidated by a high Mass on Sunday, as everybody else is singing and you wouldn't know the parts of the Mass and you could find yourself feeling like a fish out of water so to speak. At a Latin Mass, there is more space simply to be and to pray.

Andy is a trained carpenter but is out of work. 'Mister P' is a trained cabinet maker. I'd love to learn how to be a carpenter to go along with my gardening stuff. I wonder if me and my friends could start an 'odd job' business in which we pooled out skills which are currently unemployed and made a go of things. It is hard in a recession but it would be great to be our own bosses so to speak. We could do a bit of gardening, a bit of cleaning, a bit of handiwork and all that. That reminds me, I have to do my tax return and sharpish! By the way, Fr Ray, thanks for the digital camera! I'm going to take it everywhere!
at January 28, 2010

I needed to do something to my paintwork on wood a couple of years ago, and asked Jesus if He would help me, adding that I was sorry to be requesting information about wood, as what would be His interest in such things. I got a very gentle sentence begin to form in my mind that went something exactly like this....."My Child, I was a Carpenter on earth."


Our Lady is great for household hints too, if you listen carefully, well just quietly really.

Ask Him to bless your /hope/desire, He's the best guy to apprentice you.

Absolutely agree with you.