A man of ideas, a man about town, but not a man of action... 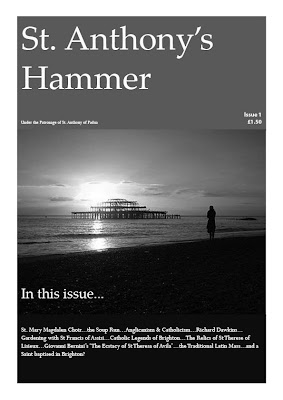 Front page of a magazine I developed and placed under the patronage of St Anthony of Padua. First draft and as you can see, I'm still obsessed with the West Pier.

I can be a prize idiot at times. You know, I have a lot of ideas. I tell them to other people and in the end people say something like, "You're barking." I come up with ideas for how to raise money for the Church, like collecting jars and selling my Grandma's recipe for apple chutney outside the Church. Then I say stuff like, I think we should get a load of cucumbers and pickle them and sell them to the Poles who go to Mass. They could get all their Polish food from us. Then I think about nicking a few soup recipes and selling soup.

People compliment my spaghetti bolognese sauce and I think to myself, 'We could sell that'. People love my carbonara sauce. I think, 'We could sell that!' I've done a gardening course, a book-keeping course (nearly!), a journalism course and a politics degree, I've humiliated myself during half of a primary school teaching course and walked away with a shattered self-esteem. I've done a desk-top publishing course and know how to use the packages and yet still, I am here, blogging, scraping by, falling into debt and then running back to mummy and daddy at the age of 32, just so I can keep my car on the road. I think now and then of going back and trying to do a teaching course in R.E, or nursing, but I have done SO MANY courses, it is getting beyond a joke. There must be another way.

The idea of a magazine, a new magazine, has been buzzing around my head for a long time. I think of the many ways that monasteries are able to generate an income for their necessities and find it inspiring. They move in somewhere and put their heads together and say, "Right...How we going to pay for this place, then?" One of the brothers turns around and says, "Let's buy a beehive and keep it in the larder. We'll sell honey and stuff."

I am unemployed and know more than a few unemployed people. The worse aspect of unemployment is the feeling useless and feeling like you are not contributing to society, so you become enclosed and insular. All too easily you can become and outsider and feel outside of society, cast adrift. All my ideas, I'd like to do. I'd like to start a magazine with the help of unemployed people, perhaps homeless people too, something in which people could tell their stories and raise awareness of what life is really like in poverty in Brighton, if not in the UK. Things start small and like a mustard seed, can grow with faith and prayer. I know two guys who sell the Big Issue who are fed up with it. They like the idea of a magazine which is developed and written by people really living poverty.

I talked to a volunteer at Voices in Exile who told me he works in Shoreham and runs a company with friends selling pies. How great is that! He just got together with some friends and they all thought and said, "Let's sell pies." So, they did! I know that there is funding for some projects.

I guess what I am saying is that I'd like to be some kind of a 'brother' and start a kind of lay community of unemployed people doing monastic type things, living a monastic-type life, like praying the Rosary, going to Mass, working, but being a self-sufficient community of people. I know that these things are difficult, very difficult in fact, but not impossible. All I do know is that it cannot be done alone. Strength is in groups, even relatively small groups to pool together their talents and their skills and come up with something that works. I'm not a communist, but I do think that capitalism drives people apart rather than brings people together. Thatcherism was too individualistic. I think that Caritas in Veritate picked up on the truth that we are a little inter-dependent. We need other people and other people need us. I think...I think that what I am saying, is that I am a hippy. We wouldn't have to live together, but we could do something positive.
at January 22, 2010

Don't forget,on the outside of society, is where Jesus chose to dwell,whilst He lived amongst us.

I reckon it's still his first choice. The poor are His feet, on earth.

That is what we need to emulate - His independence from the demands of other people's empty ideas.