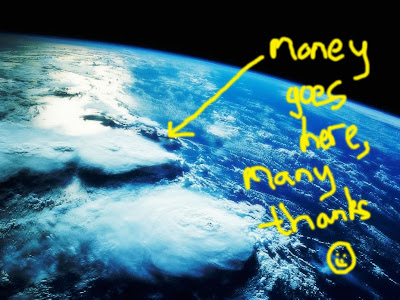 Mother Earth has made an 11th hour attempt to persuade the leaders of the World to rethink on climate change and push for a better agreement...with her! But, the UN claim that she will only do it for a fee. This fax (pictured above) has been sent anonymously to the UN, and it is being claimed by the UN that it was from Mother Earth. Sir James Lovelock, the 'Healing Gaia, human-population-is-a-cancer crackpot' said, "This is wonderful news! I know that Mother Earth will not let us down. She says she wants money to stop the global warming. I trust her, let's do it!"

Johnathan Porrit too confirmed the news with excitement. "This is the first time Mother Earth has actually spoken to us and she is our friend! I say, even though it looks like, once we give her £500,000,000,000,000 , she will be kind to us and sort out the climate, we should still get people to have one child families at the max so that we never get ourselves into this mess again. Actually, if we could get it down to 1/2 child to 3/4 child families, that would be even better."

Secretary general of the UN, Big Moon the III, said of the fax, "I can confirm that the money will be raised. We won't give it to the developing countries. Why bother when Mother Earth can do more with that money than mere carbon-credification. Now that Mother Earth is on our side, there's no way we can go wrong! This solves the issues with the developing nations as well. I know we've had problems with her before but I am pretty confident that if we give her the cash she wants, that she'll be faithful to her promise to sort the climate out. I think she's going to reset the climate back to what it was in the good old days."

Mother Earth, who has gained a reputation in some circles for being 'a bit of a bitch' at times, is known to be highly unpredictable and prone to just lashing out for no apparent reason, at great human cost, like in the Sri Lankan Tsunami and the Pakistan earthquake. When asked she would not comment on the apparent fax, instead saying, "Sorry, can't talk, bowel problems. Hurts to the core..."

Incredibly when asked where Mother Earth wanted the money dropped, the UN press secretary replied, "Conveniently, it is an address very near to the UN offices in New York. Talk about a co-incidence! Don't worry, the UN will make sure she gets the money. You can trust us. If all the Governments have a whip round, I know we can raise enough."
at December 19, 2009

The money has to be taken to one of the five volcanoes where Mother Earth is providing the service. All currencies, notes and coins are accepted, also cheques, credit and debit cards and American Express. The money must be dropped in the cone.

If sufficient money is received the planet will be saved.

You can also put on a sweater and turn your central heating down 5 degrees.