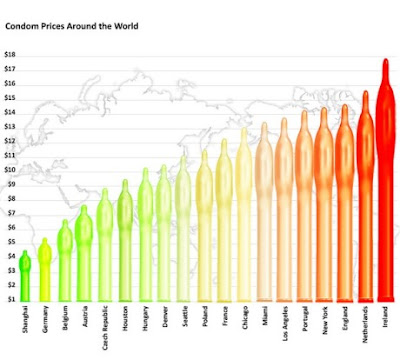 St Mary Magdalen altar server and all round good egg, Andrew has sent me this piece from The Telegraph. I'm reminded that the Italian Cardinal Giacomi Biffi cited in an article once that "the Antichrist presents himself as a pacifist, ecologist and ecumenist". The Telegraph reports...

The Optimum Population Trust, backed by Sir David Attenborough, believes that contraception is the cheapest means of preventing climate change, arguing that every £4 spent on family planning over the next four decades would reduce global carbon dioxide emissions by more than a tonne. Comparatively it would cost £8 for tree planting, £15 for wind power, £31 for solar power or £56 for hybrid vehicle technology before a tonne was saved, according to a cost-benefit analysis done for the group. The group, also backed by Sir Crispin Tickell, the former diplomat, and environmental campaigners Jonathon Porritt and James Lovelock, believes that 80 million pregnancies each year are unwanted, and the use of contraception would help cut this figure.

This article makes me want to get on the lift up to the top of the eco-flats where I live, break wind, have a barbecue using finest coal, spray deodorant into the atmosphere and shout, "B*stards!". Just in case anyone believed that it was humanity that these people cared about, or the future of civilisation, then here is a list of quotes made by some of the most influential people in the climate change/population destruction movement. For more of these delightful quotes click here. My responses in orange, bold.

“Isn’t the only hope for the planet that the industrialized civilizations collapse? Isn’t it our responsibility to bring that about?”
- Maurice Strong, founder of the UN Environment Programme
[Er...No.]

“Humans on the Earth behave in some ways like a pathogenic micro-organism, or like the cells of a tumor.”
- Sir James Lovelock, Healing Gaia
[People aren't a cancer. People like you are. Anyway, 'Healing Gaia'?! What are you some kind of eco-friendly warlock!?]

"A reasonable estimate for an industrialized world society at the present North American material standard of living would be 1 billion. At the more frugal European standard of living, 2 to 3 billion would be possible."
- United Nations, Global Biodiversity Assessment
[Charming. I've heard of 'town planning' but this is one step too far.]

"One America burdens the earth much more than twenty Bangladeshes. This is a terrible thing to say in order to stabilize world population, we must eliminate 350,000 people per day. It is a horrible thing to say, but it's just as bad not to say it."
- Jacques Cousteau, UNESCO Courier
[Even to think it, surely condemns you in the eyes of God.]

“If I were reincarnated I would wish to be returned to earth as a killer virus to lower human population levels.”
- Prince Philip, Duke of Edinburgh, patron of the World Wildlife Fund
[If, on the other hand, you should ever find yourself burning in Hell for all eternity, you'll change your opinion, I'm sure.]

“We need to get some broad based support, to capture the public’s imagination… So we have to offer up scary scenarios, make simplified, dramatic statements and make little mention of any doubts… Each of us has to decide what the right balance is between being effective and being honest.”
- Stephen Schneider, Stanford Professor of Climatology, lead author of many IPCC reports
[So, doubts about the IPCC's trustworthiness are well and truly unfounded then!]

"We've got to ride this global warming issue. Even if the theory of global warming is wrong, we will be doing the right thing in terms of economic and environmental policy."
- Timothy Wirth, President of the UN Foundation
[Read: "If we have to, we'll lie through out teeth and use propaganda."]

"The earth is literally our mother, not only because we depend on her for nurture and shelter but even more because the human sepcies has been shaped by her in the womb of evolution. Our salvation depends upon our ability to create a religion of nature."
- Rene Dubos, board member, Planetary Citizens
[Nope! Our salvation depends on God alone and people who make a religion of nature are usually satanists, wiccans or occultists.]

Crackin' eh? These are the people who are in control of the climate debate and unfortunately nearly all of them despise people and see people as a 'cancer' upon 'mother earth'. Hardly, 'made in the image and likeness of God' stuff is it? Looks like things are about to get very, very messy. Furthermore, I would not expect the United Nations's investigation into 'Climategate' to be very thorough, given the views of so many high-ranking 'eco-warriors' on this issue. With men like that in such positions of power and influence, Heaven help us all! These guys make the architects of the French Revolution appear as cherubim near the Throne of God. 'Why is a Catholic blogger writing furiously about climate change?' I hear you cry. Well, the ideology that is being espoused by people with power and influence makes it sound like the worst heretics in history are running the show, which ultimately means tears and bodybags.
at December 04, 2009

Eliminating 350,000 people a day would need 70 extermination camps with the capacity of Auschwitz.

It's no coincidence that most of those who are obsessed with population growth are post-reproductive wealthy white men: it's about the only environmental issue for which they can't be blamed. The ultra-rich have decided that it's the very poor who are trashing the planet. The Optimum Population Trust which includes David Attenborough and James Lovelock among its patrons is one of dozens of campaigns and charities whose sole purpose is to discourage people from breeding in the name of saving the biosphere. Is there any campaign whose sole purpose is to address the impacts of the very rich? I doubt it. One sixth of the world's population is so poor that it produces no significant emissions at all. Households in India earning less than 3,000 rupees (£40) a month use a fifth of the electricity per head and one seventh of the transport fuel of households earning 30,000 rupees or more. Street sleepers use almost nothing. Those who live by processing waste (a large part of the urban underclass) often save more greenhouse gases than they produce.