BBC's Bizarre 'Have Your Say' on Ugandan Gay Law 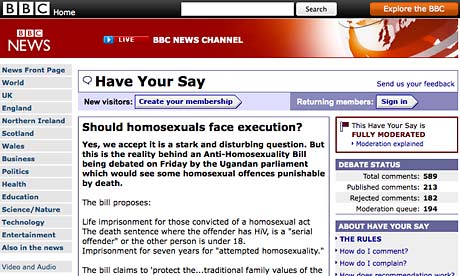 Courtesy of The Guardian

The BBC today asked users of its news website "Should homosexuals face execution?" on a talkboard discussion for a World Service programme for African listeners. Posted on a BBC News premoderated talkboard, the thread was designed to provoke discussion ahead of the latest edition of interactive World Service programme 'Africa Have Your Say'. The headline now reads, 'Should Uganda debate gay execution?'

I listened to the said World Service programme last night and I felt awful for the Ugandan man who they interviewed, who basically said that it was a terrifying country to live in as a man with the homosexual condition. He thought he was the only man in the World with this condition and lived in fear for his life, because of the police and the fact that neighbour turns on neighbour. I'm surprised he hadn't topped himself years ago. Poor lamb. We Catholics believe the act of homosexuality is a very serious, mortal sin. However, we don't believe people should be crucified for their sins, since Christ has taken our sins upon Himself, out of love for mankind. Human law should reflect not only God's justice, but His mercy also. The state debases itself and society when it sheds the blood of its own citizens, especially if sins are committed out of human weakness rather than malice. The liberalisation of laws on homosexuality may have gone well beyond the pale in this country, making the gay lifestyle something actively promoted but it is the opposite end of the Ugandan extreme.

That said, at the same time, the BBC World Service is probably beginning an attempt to change, through its coverage, African attitudes towards homosexuality. African society is predominately pro-family and anti-homosexuality. The BBC is a propaganda machine for the gay political movement and probably wants to remake African society in modern liberal Britain's image. Wherever it is aired, perhaps, 'Auntie' wants to spread heresy, sin and liberalism, to every continent 'she' can. There will have been a time in the 1950s/60s when the UK was a lot more pro-family. Doubtless the BBC was intrumental in turning the UK into anti-family country it now is through the promotion of homosexuality and a wholly anti-family political agenda.

Liliane Landor, the BBC World Service acting head of Africa region, defended the radio programme and talkboard post, saying it allowed gays and lesbians from Uganda, whose voices have never been heard in the UK, to talk with dignity about the impact the legislation would have on their lives.

The show also included the opinion of those who supported the anti-homosexual legislation, including religious leaders, she said. "The programme was a dignified exchange between people who have differing beliefs," Landor added.

Interesting. Has anyone tried having a 'dignified exchange between people who have differing beliefs' on 'Have Your Say' in this country? Catholics I know who have tried putting their point of view across on BBC websites have been moderated severely. Looks like the BBC has one rule for Africans and another rule for the UK.