Who Owns Your Local Newspaper? 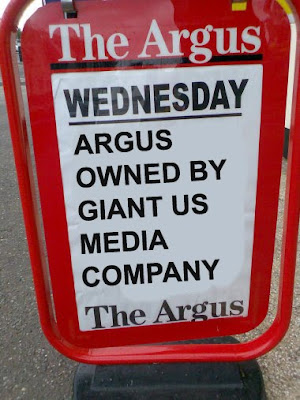 No wonder The Argus doesn't campaign against gigantic corporations like Tesco ruining the livelihoods of local shopkeepers, buying up streets and whole tracts of land as if life were a game of Pacman! The Argus might just as well be owned by Tesco! Brightonians! Unite! Your local rag is owned by a gigantic US global media company, called, ironically enough, Gannett!

Thanks to a very interesting website called 'Media Owners', we know that...

Craig Dubow is the CEO of Gannett Company, Inc. Gannett Company (NYSE: GCI) is one of the largest and most influential media companies in the United States. It is the leading US newspaper publisher as measured by total daily circulation. Its assets include the national newspaper USA Today, and the weekly USA Weekend. The company also has significant broadcast television holdings, including over 20 TV stations.

Newsquest plc, a British subsidiary of Gannett, is the UK's second largest publisher of local and regional newspapers. Gannett also has operations in continental Europe and Asia. The company was founded in 1906 by Frank Gannett as a newspaper business. It owns one-third equity in CareerBuilder, an online recuiting resource. Gannett also holds a 25% interest in Topix.net, an automated online news aggregation service, which it acquired in March 2005. At the same time, Knight-Ridder and Tribune Company each acquired 25% of Topix.net.

I'm not surprised, of course, having done my NCTJ in Magazine Journalism and Media Studies (only a slacker like me would choose Media Studies!) for A-Level. However, one does begin to wonder just how independent, unbiased and thorough in their reporting these local Argus reporters can be, when they are owned by such a massive US multinational media corporation. Where there is money and power there is greed and, I dare say, not a little corruption. I don't know, I guess I was just a bit naive in thinking that the local newspaper reporting the news on community related issues in surely the smallest so called city in the UK, might be free from the looming shadow of a huge US media mogul. But no...

This post, by the way, isn't related at all to the fact The Argus ran a deliberately controversial and spikey headline on my local parish priest without contacting him to clarify his remarks or, say, include his blog address so that people could read his comments for themselves, or, say, print his whole blog post, at the centre of which lay not an attack on homosexuals but the bare-arsed fact that there is not one party in Brighton for whom a Christian can vote without his conscience becoming thoroughly besmirched.

No, far from it. All I am saying is that a local newspaper (I believe it is something of a monopoly here in Brighton, as I am yet to see a competitor...note to self, start rival newspaper), far from being local, is actually owned by a, and I know I keep repeating myself but it needs to be emphasised, absolutely enormous US media giant. Maybe The Argus should just be renamed Wal-Mart and have done with it...At least then the people of Brighton and Hove would know where we all stand. At least we'd know we were in the frozen vegetable section...

So, basically, everytime you buy a copy of The Argus, remember it goes to a...

The day I see the following headline, the story of which I will report tomorrow, since the allegation has indeed been made, is the day I respect The Argus. 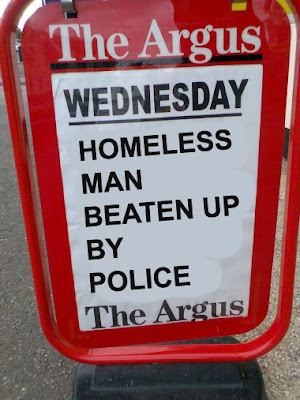 I just wrote an email to Ben Parsons, Crime Correspondent, with this link attached asking him if he'd ever consider leaving the Dark Side and set up a local newspaper that reports real news. Poor Argus reporters. Word on the street is that these wannabe national hacks actually get paid peanuts for writing like monkeys working for a huge multinational media corporation with an average total sales of $7.38 billion.
at March 05, 2010

Nice one, Laurence. You're like a cross between George Orwell and GKChesterton. Damn right you should be forcing the paper to up its game and print real journalism! Our local papers in Newcastle are both owned by Trinity Mirror, and the quality of the journalism in them is abysmal. Can't wait to read more.

Great reporting. I never knew that about local papers.