Energy Bills: You didn't have enough in the bank to pay the first bill. It escalates and the bill doubles. You certainly can't pay the third bill and not the fourth or fifth. You arrange a direct debit of £80 a month with credit control, which you then realise you will probably be unable to pay. 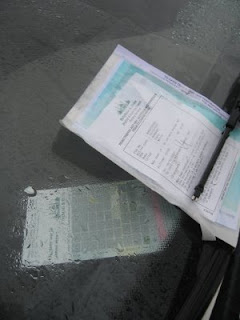 Parking tickets: After the first 10, you become immune to their psychological effect and throw them on the car floor and forget about them. You couldn't pay the first one, so what is the point in worrying about how to pay the 11th. You know that eventually they'll have their day in Court and you'll get a County Court Judgment and massive fine that you can't pay, but what can you do?

Car Tax Disc: You've got £45 in the bank. The tax disc is about £90, so you have to take your car off the road. It expired on 28th February and now it is the 1st March, so you have to act fast before your car is taken away by the State and thrown onto a scrap heap...or sell the car, so you can't drive the elderly man from Church to the opticians, even if he does pay you to do so.

Engagement ring: Your fiance's ring doesn't fit her finger. It's too loose. You go halves with her on having it resized. Priceless. There's some things that money can't buy, but for everything else, there's about twenty quid left in my account.
at March 01, 2010