Straw: "We are angry these MPs got caught..." 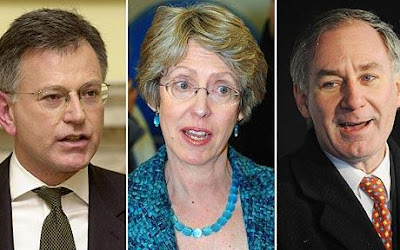 The Telegraph reports that...

'The Justice Secretary said the three Labour MPs have damaged the reputation of the Labour Party, but he insisted that no serving member of the Government was implicated. The three former Labour cabinet ministers have been suspended from the Parliamentary Labour Party over allegations they tried to sway policy decisions by lobbying the Government. Mr Straw said: “There is such anger in the Parliamentary Labour Party, as well as I may say incredulity, about their stupidity in allowing themselves to be suckered in a sting like this."

What an incredible thing fort the 'Justice' Secretary to say! 'Carry on boys and girls, just don't get caught next time!' The Parliamentary Labour Party is not so angered at the corruption at the heart of Government or at the news that politicians can be bought off by special interests! Neither are they worried that the UK fast appears to be about as democratic as the mafia! Oh no! It is angry about the bad publicity! God help this country's politicians, but don't bother helping the Labour Party! These chancers are beyond the pale!
at March 23, 2010

The LOVE of money IS the root of ALL evil. Lord, help me to see my own weaknesses in this area, expose any hidden desires that are not from you.

Scum. All of them.

Pray for them - they need it!