Time to Give The Argus a Good Fisking 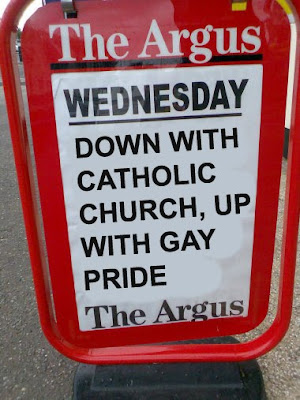 I've had a little browse through the search engine of The Argus to see whether they have done any 'in depth analysis' of Fr Ray's words. Totally surprisingly, they haven't. They do, however, have this little nugget of anti-Catholicism. If ever a 'comments and analysis' page was dying to be fisked, it is this one, primarily because The Argus pander to anti-Catholic prejudice and, yep, you guessed it, the vociferious hedonistic gay lobby.

Father Ray Blake of St Mary Magdalene Catholic Church, Brighton, has attacked gay people for being ‘hedonistic’ and complained that local politicians pander to the ‘gay lobby’ and are ‘ignorant of our faith’. [No. He attacked Brighton politicians for pandering only to the "vociferous hedonistic gay lobby", which, as we have ascertained, does not even include the entire 'gay community' of Brighton, let alone 'gay people'. The same politicians are ignorant of the Catholic Faith.]

The offensive nature of Fr Blake’s remarks is unfortunate [As is your misrepresentation of what he said. Sorry, what is your name? Oh, I see! You didn't leave one! Funny that. Go on, be brave and come out of the 'closet'...] but what is more serious is his failure to understand the extent to which the church itself is to blame for many gay people and many politicians wanting nothing to do with it. [Read: 'Catholic Church hates gays'.]

Father Blake’s God is for everybody. [Yep!] The mission of Christianity is to extend God’s kingdom beyond the boundaries of just Israel, as in the Old Testament, to the whole of humanity across all the earth. [This guy has got it!]

This is the good news, the gospel, of the New Testament and it really is for every human body. To make the point crystal clear the Son of God spent his time sharing the lives of marginalised people whom society despised. [Too true!]

Sadly, however, the church has failed time and time again to realise how radical this message actually is. [Oh...really?] Instead of condemning [politicians who pander to the vociferous hedonistic] gay [lobby] people Father Blake should ask himself what he is doing to evangelise the gay community, and why he does not have more gay people in his church. [You are right! Let us send some holy missionaries to preach the Holy Gospel at local Brighton gay club, 'Revenge' or maybe, 'Legends'! We'd go down a storm!]

The answer of course is that gay people are not there [Clearly, the writer is not familiar with St Mary Magdalen's...] because of the Church’s relentless hostility and its misrepresentation of a handful of biblical texts to condemn them. [Ah...the sodomy controversy.]

To justify its persecution of homosexual people ["No, Father, have mercy! Don't turn the screw again! Aaaarrrggghhh!"] the Catholic Church draws on just three brief texts scoured from the thousands of pages of the Bible: a) the ‘Sodom and Gomorrah’ story in Genesis, [in which the angry, vengeful Old Testament God destroys both cities because of their unnatural relations] b) the Leviticus holy code ['Don't lie with men, men!'] and c) reference to ‘unnatural relations’ in a couple of letters of St Paul. [So, we've got it sussed. Gay sex is against the natural law, right? Seems pretty clear to me!]

In the Old Testament, which was written in the Bronze Age some three and a half thousand years ago, the Sodom and Gomorrah story is about the failure to afford hospitality to strangers, a dreadful sin in the ancient Middle East. ['No Old Testament Divine Punishment of hot man on man action to be seen here...move along now...']

Leviticus is a long list of so called ‘abominations’ which include eating shellfish, wearing mixed fabrics and having sex with menstruating women. Leviticus even prescribes the death penalty for disobedient children. Why does the church single out one sentence in Leviticus, whose relevance to gay people is highly dubious, and ignore hundreds of others? The suspicion must be that there is a pre-existing prejudice for which justification is being sought. [Yes, we are the people of the New and Everlasting Covenant. God loves and died for all sinners, including homosexuals so three cheers for God!]

In the New Testament, St Paul actually writes about ‘unnatural relations’ as a punishment for idolatry, the worship of objects rather than God. Again it is debatable whether he really means homosexuality as we know it, but either way it is the punishment and not the crime. ['For this cause God delivered them up to shameful affections. For their women have changed the natural use into that use which is against nature. And, in like manner, the men also, leaving the natural use of the women, have burned in their lusts one towards another, men with men working that which is filthy, and receiving in themselves the recompense which was due to their error.' Hmm...Dunno...What does he really mean?]

In his 1986 statement Cardinal Joseph Ratzinger, who is now Pope Benedict, ignores Biblical scholarship [the biblical scholarship of heretics] to claim that the Bible condemns all homosexual acts, that homosexuals are ‘intrinsically disordered’ and have a tendency to evil [Yes, its true and its shocking. Homosexuals are sinners as well. Homosexuals are called to chastity too.]. With teaching like this it is unsurprising that gay people feel alienated. Being a gay catholic has been described as being like a Jew in the Nazi party. [Yes it has...by you, just then.]

The unfortunate truth is that the Catholic Church has a truly terrible history of misusing the Bible to oppress and persecute many different groups: slaves [Eh?!], black people [Come again?], the disabled [What the - ?], Jews [Not this again!], women [Priests: "Get back in that kitchen before I show you the back of my hand! Actually, what are you doing in my house!? Anyway, start knitting, b*tch and knit fast!"], and gay people are in a very real sense just its current target.

Here may well be the explanation for Father Blake’s complaint that none ‘of the parties standing for election locally represent his religious views’. [Of course! Now it all makes sense! The local Priest criticising politicans for listening only to the pink pound is only doing that because he hates Jews, Blacks, gays, the disabled and women!] Perhaps this is because none of them can stomach the obnoxious discrimination which his church pursues against a large number of their constituents, urged on by a pope who instructed his bishops to fight against the Equality Bill with ‘missionary zeal’. [The War on Gays. Sorry, can't remember either the Holy Father or my parish Priest mentioning that in a homily. Both rightly fear, however, that religious liberty and even freedom itself, in this country, are going to the wall in order to appease the demands of a vociferous minority.]

The Labour government, according to Father Blake, ‘has become contrary to the spirit of Christianity’ by which he presumably means supporting the human and civil rights of gay people. [It is more than just that, believe me. The Labour Government are anti-Christ in many, many ways, the LGBT nonsense is just one part of the big satanic jigsaw.]

Actually the Labour government, and indeed most people, might think that the spirit of Christianity has more to do with loving your neighbour and welcoming everybody regardless of race, gender, ethnic origin, disability or sexual orientation. [The spirit of Christianity is not what we thought it was. It is basically a Brighton & Hove Council Application Form.]

An objective reading of the New Testament is a lesson in inclusivity. [Lectio Divina with New Labour!] It is arguable that the Holy Spirit is now working through the secular world to bring about change in God’s church. Changing Attitude Sussex works for the full inclusion of LGBT people in the Church.

At our next meeting on Monday 12th April at 8pm at The Chapel Royal, Brighton, Jeremy Marks of Courage UK will explain how he took the church’s beliefs seriously and tried to ‘cure’ gay people of their homosexuality. After a decade he recognised that he had achieved nothing and had done a great deal of harm. He made a public apology and now celebrates gay identity as a blessing from God. ["I thank you, O Lord, for my homosexuality."]

Everybody is welcome, even Father Blake! [Oh my! How generous of him to invite our parish priest as well having derided him in print so shamelessly!]

Sorry...just had to remove the electrodes from my skull. It won't work boys! Anyway, as it happens, I'm taken. See you there, mate, whoever you are! I sure hope you're feeling inclusive on Monday 12th April at 8pm at The Chapel Royal! I might be bringing a few friends!
For those of you who can bare to read yet more misunderstanding and ignorance from the ranks of the 'offended', here are a couple of letters on the Fr Ray story. If comments are open still, be angels and defend him there as well. Write to The Argus and tell them they're bent, but not in that way.
at March 06, 2010

Can you get someone to film the meeting on their mobile or something? Should be interesting to watch what happens...

Are you using a computer to fake those 'Extra-Extra' style displays? If so it's a bloody impressive fraud - go the slightly slanted angle right and everything

'Jeremy Marks of Courage UK will explain how he took the church’s beliefs seriously and tried to ‘cure’ gay people of their homosexuality.'

There's an interesting parallel in this accusation. In 'Blood on the Altars,' one can read how the charge against the Church during Her terrible persecution by the Mexican government is that the Church taught the Indians how not to be Indians.

You can be sure no one's teaching them now. You can drive through their villages where they sit on the side of the road waving the tattered cups they beg with.

Laurence's commentary on the article is as usual heartbreakingly funny. How does he do that? It makes me cry!