"MPs for LGBT Movement? Nah, Get Away!" 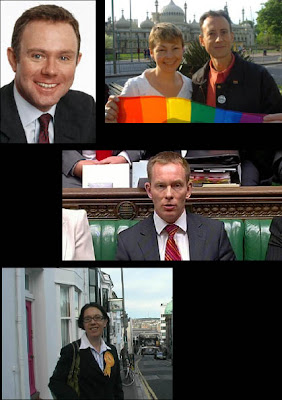 Anyway, so as I was saying, for Fr Ray Blake to even dare to suggest that the major political parties are in the pocket of the LGBT political movement at the cost of listening to say, the Church, another minority, is patently absurd. What rot! He must be paranoid or something! Flippin' sky fairy worshippin' mental cases!

Take these political animals for instance. You have, in the top left hand corner, Nick Herbert MP (Con) who is the Shadow Secretary of State for Environment, Food and Rural Affairs; on the top left our very own Caroline Lucas (Green), standing with a rainbow flag next to none other than Peter Tatchell (Green/Outrage!), then you have Chris Bryant MP (Lab), a Minister of State for Europe, famed for £92,000 in expenses, and bottom left, local hopeful Juliet Williams (Lib Dem), standing up the road from Brighton Station and for election in Brighton Kemptown (gay 'heartland') in the next election.

Oh, hang on. Aside from Caroline Lucas, pictured above with Peter Tatchell holding a massive rainbow flag, these men and women will be the taking part in a 'Question Time' at the seemingly huge NUS LGBT National Student Pride annual event in Brighton on Saturday 6th March, in which they will listen and respond graciously to the concerns of the entire nation's sapling LGBT movement here in Brighton!

Crikey! Looks like that crackpot Priest was right! Let's invite all these people to St Mary Magdalen's for a celebration of Catholicism! Perhaps we can have a minute or two silence for the years when to be Catholic in this country was illegal and punishable by death, imprisonment or torture! After all, its taken years for us to get to this stage where 'Catholicphobic bullying' has been once and for all eradicated from our shores and we have finally got the equality for which we always campaigned! Thank God above that after years of persecution, the underground Catholic scene and over 50 known martyrs, that Catholics now can, for example, work according to their conscience in every sphere of human activity, like, er, education! Yes! Come on MPs, come and meet us too! What a great idea! May I recommend a Solemn High Mass. We'll get the choir to do Haydn and we'll order in a crate load of Cava and nibbles afterwards, followed by a brief 'Question Time'! Bagsy I'll be in charge of the vol-au-vents...
at March 02, 2010