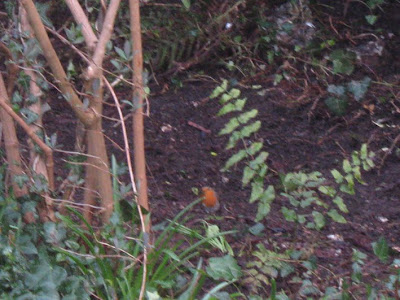 The Times, the BBC, The Guardian and even the Catholic layman owned The Telegraph are sticking the knife into our beloved Holy Father, who it is now beyond doubt, was, as Cardinal Joseph Ratzinger, single-handedly orchestrating the deliberate abuse of over a billion Catholic children.

So, while the enemies of the Pope both within and without the Church continue to destroy His Holiness's reputation with so many news stories that one wonders whether the phrase 'media overkill' was invented solely for this past month, here is a picture of a Robin that I took today while gardening at a client's garden in Preston Park, because, after all, we all need a bit of cheering up, as if the Annunication of the Lord isn't enough to have us Catholics usually bobbing around like little birds full to the brim with holy joy. It rained at times today and I managed to avoid being struck down by lightning during a brief thunderstorm. The Priest at the heart of the latest allegations of the 'Papal Paedophile Ring' scandal which the media will seemingly never let lie, is another sinful Lawrence, one Father Lawrence Murphy of Wisconsin, USA. Here are just a few of the jaw-droppingly slanderous, salacious headlines:


Damian Thompson quite rightly smells a 'stich-up' while the Catholic News Service tells it as it is:

'The Vatican defended a decision not to laicize a Wisconsin priest who sexually abused deaf children, despite the recommendation of his bishop that he be removed from the priesthood. In a statement responding to a report in the New York Times, the Vatican said that by the time it learned of the case in the late 1990s, the priest was elderly and in poor health. The Vatican eventually suggested that the priest continue to be restricted in ministry instead of laicized, and he died four months later, the Vatican said.'

So, something of a storm in a tea cup then? Why no, of course not! This is the smoking gun the gutter press has been looking for all along! To read the full and frank rebuttal of The Times's continual persecution of the Holy Father click here. Thank God someone out there is defending him against the most systematic, highly organised and unyielding media witch hunt since Senator John McCarthy first started drawing up questions to ask Americans concerning their personal adherence to Western capitalism. As we come closer to Holy Week, it only seems fitting that not only are the crowd beginning to revile, condemn and crucify the Vicar of Jesus Christ on Earth, but even the Apostles are keeping quiet, running away, or hanging themselves on the tree of their bitter and sinister betrayal.

This pope does nothing but undermine Church teaching in the men he appoints in important positions, such as Chicago's Cupich, in the way he treats faithful Catholics and in his modernist support of innovations etc. He is being blamed by the homosexualists for their gay plane being shot down at the synod, but that was none of his doing. He's brought nothing but scandal on the Church. I hope he resigns. He SAYS all the right things but DOES the opposite ...double minded and confusing!