The Argus Just Don't 'Do' Compassion 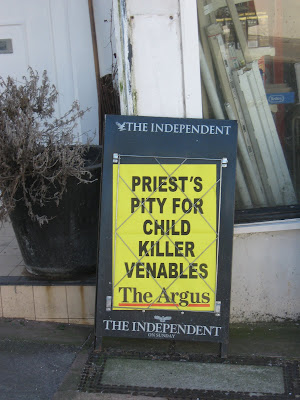 Fr Ray Blake is in The Argus again. Again, they read his blog and printed it because he wrote a 'controversial' post on the Jon Venables media frenzy. This time around the responses on The Argus website and the local public reaction appear to largely express disbelief that The Argus are trying to create a storm over his comments. Some commenters ask quite what the local rag expected a Catholic Priest to say, what with the Church preaching forgiveness and compassion? Fr Blake has said nothing controversial, other than to represent Christ's teaching. I suppose such a teaching of compassion is always bound to attract criticism. The Argus, as I have said before, is a sorry excuse for a newspaper. It is no wonder that so few of their journalists seem to go on to work for nationals. They don't check their sources, for instance, which, let's face it, is pretty basic journalism. Feel free to go defend our heroic priest again...

I talked to a BBC South journalist yesterday on my way back from doing the accounts at the Church. He was filming the front of the Church waiting for someone to go in! I told him Mass had been and gone at 10am so he'll be waiting all day. He had a call from BBC South office and was discussing the fact that Fr Ray Blake was too busy to chat and asked whether to do a 'voxpop' in Brighton of residents, but, unfortunately admitted he was struggling to frame a question. He admitted this appeared to be something of a 'non-story'. I told him the Church does not condemn individuals but offers compassion and forgiveness to everyone. He admitted that, in all honesty, he didn't really know why he was there! I ended up feeling a little sorry for him. It just goes to show that being a 'proper journalist' is not that rewarding, since your employer will only send you out to get sensationalist gossip and try and stitch up the local parish Priest. He appeared to be packing up and going home. I was surprised that the Daily Mail picked up on the story as well but, it appears, the local and national gutter press like the Daily Star are bound to leap on a Catholic priest's words in relation to such a high profile case and slander him. The Times got Fr Ray's name wrong and called him 'Fr Michael Blake', so perhaps journalistic incompetence is not the 'Express' virtue of local hacks.

Here are some more links.

I know that that bill board is genuine as there is one up here today!

I have not bought the Argus for years but made an exception today to see how Fr Ray's comments were portrayed. They mentioned that he had refused to give them an interview and yet they still managed to fill most of the page.

I am glad the journalist was able to see you yesterday and amused at him waiting outside for someone to go in. Waiting all day you say and as yesterday was Tuesday probably all night too until Wednesday morning as due to its position in town as you know the church is no longer able to remain open as in the past. Amused to learn that the journalist did not really know why he was there!

Regarding the Argus I remember when they came round one evening and asked my husband whether he would like a free delivery of the paper for a certain time. They seemed a bit taken aback when he said 'No - he would not touch it with a barge pole.' The firm he worked for had had a lot of problems with misinformation being reported in the Argus and eventually they refused to give any interviews unless they could read what was going to be printed in the paper before publication.

Surprised The Times got Fr Ray's name wrong - checking facts is an important part of journalism.

Type the words into a box and then use the perspective distortion feature and it will be more difficult to know if they aren't genuine!