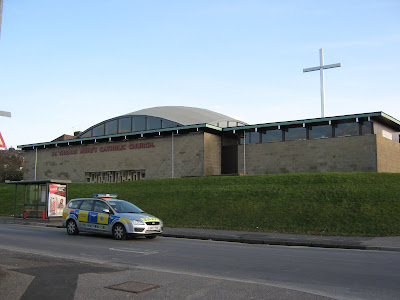 Built to the Greater Glory of God

Aliens arrive on Earth and land in Hollingbury, Brighton. They quite naturally go to a Police station to enquire about who they should speak to about God since they have heard that the Son of God dwelt with mankind around 2,000 odd years ago and the events surrounding His Life were so significant that the vast majority of mankind changed the calendar. The Police drop them off at the nearest Catholic Church.

So, the Priest calls the Vatican and tells the Vatican that aliens have come to him to enquire about the Redemption of the World. The Vatican say, "Sure thing, stick them on a plane and we'll catechise them. They can have a private audience and all that." The Priest puts the phone down.

The aliens giggle amongst themselves until one of them says, "Look," holding back his laughter, "Who are these chancers!? I think if God had really come down to Earth from Heaven, they'd have come up with something a bit better than that! See you later, Father! Come on boys, we're going home..."
at March 03, 2010

Isn't it the Custody Centre at Hollingbury?

I can remember the church being built. The 60s I think. When I attended the Funeral Mass of a friend there last year what really upset me was looking around inside and not seeing any sign of the Tabernacle. The church felt so empty.

It was not until I turned to come out that I saw it tucked on the side bare and unadorned and unacknowledged by all who left. I wish I had known where the Blessed Sacrament had been kept when I entered. Perhaps there should be arrows on the floor in keeping with the modern idiom? - only joking.

I should add that my friend was very attached to her parish so much so that even though she had left the area some years before she had requested her funeral to be there so we have to admit the style of church does not put everyone off.

On the way up north at Christmas time I passed the ugliest church I had ever seen - no I cannot remember where except it was just south of London - and made the comment 'I bet that's one of ours' - and it was!!!

We have some spectacularly horrible churches. Sydenham looks like a public toilet. Redhill has a nasty one that replaced a nice Victorian building. Crawley is an example of how an indifferent modern church can be improved and there are a few ok recent ones, eg Steyning, converted from a flint barn.

I wonder if there is not a too-cosy relationship between the church and some firms of Catholic architects? But part of the trouble is the brief, and that is generated by the liturgy.

Good advice from a sensitive planning officer can help. This report by English Heritage is interesting

Physiocrat mentions the liturgical changes. I cannot understand how what the council actually said is often contrasted with what Church officals here thought it said.

Looking up a certain parish website (not here) I was surprised to read the following:-

1981 saw the repositioning of the Sanctuary to turn the altar to face the congregation as required by the Second Vatican Council.


I understand that this was not actually stated - I believe a comma in the wrong place altered the original meaning and yet it was followed to the letter and still believed today. Can anyone tell me why?

Physiocrat - Custody centre? We used to say it looked like a cross between a cinema and a public library!