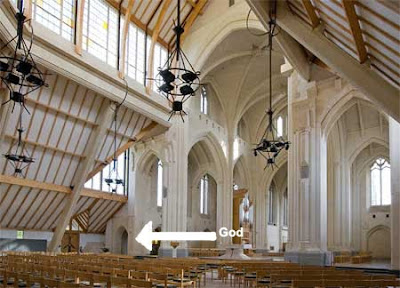 I had the pleasure of driving to Douai Abbey and on to Oxford recently for a day trip. I spent a little time in the Church of the Benedictine Monastery.

I wonder how St Benedict would have felt (or feels) about a small conversation I had with a retired missionary Priest. He happened to be walking out of the ('modern' theology shelf-stacked) bookshop and we had a brief chat. He asked me what I made of the Church. I said I couldn't quite understand why they had decided to place Our Blessed Lord in a corner in a side chapel. He said that he understood where I was coming from. "I was there," he said, "when it all changed after centuries."

I thought for a moment of bliss that we were in agreement on the 'central' issue of where the Blessed Sacrament should be in a Church given that it is, after all, the Almighty God Himself, the Sacred Host, until he said, "But then we realised that the Altar is the central place of the Church since the Church is built around the Altar, because that is where the Sacrifice takes place. People can still have a private devotion to the Blessed Sacrament, but we realised that the new arrangement made more sense."

Having walked around possibly the most contrived and dull Church interiors of all time, absent of Saints, adorned with naff stained glass, the theological equivalent of a goldfish bag pierced with holes, I was taken aback by the comment of the retired missionary Priest. How, after centuries could 'we' have just 'realised' that the very core of our Faith, the Blessed Sacrament, the very heartbeat of the Church Herself, should be housed in a dark corner of a Church? How could reverence for Our Lord be something which was to be kept for a special 'private' devotion? 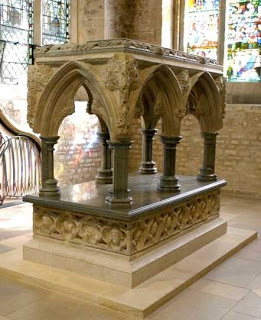 Pictured to the left is the empty tomb of St Frideswide's Shrine at Christ Church Cathedral, Oxford. Apparently the remains of the 7th century Saint were dug out, mixed up with those of someone else and disposed of somewhere. It was the Protestant 'reformers' during the Reformation who decided to go into God's Church and desecrate it, chop the heads off of the statues of Saints in rage at the holy doctrine of their Communion with the Church Militant. Of course, all of these desecrations scar Christ Church Cathedral and their presence there, along with the distinct and eerie Non-Presence of Our Blessed Lord in the Sacrament of the Altar, bear witness to the horrendous damage that man can inflict on the House of Prayer, when centuries of Holy Tradition and Truth are over-ridden by men who 'realised' that they knew better than the Popes, Saints, Martyrs and Laity who built for and died for the Church down the ages, passionately seeking to dedicate Churches to the Greater Glory of God and to tell all who entered in them that this most Sacred and Holy Shrine, is the place where God Himself dwells.

Of course, I wanted to say something to the Priest about the fact that more and more Catholics, including Laity, Priests, some Bishops (somewhere) and the Holy Father himself, have, at some point, 'realised', that it is precisely this lack of reverence for the Blessed Sacrament which has done untold damage to the Body of Christ, His Church, to souls and to the life and health of the very human institution founded by the Son of God, but I didn't want to lose my temper in the Presence of God. It is because the Church is a very human institution that more and more men and women are discerning that Holy Tradition safeguards much that is at risk when we think that 'we' have 'realised' anything which takes an axe to the roots of the Most Holy Faith.
at March 18, 2010

I too was "there" when the switch was made. I was young, naive, and a recent convert. For a long time, I bought the explanation given by the retired missionary priest. But I've changed my mind. We've lost too much by removing the tabernacle. In my parish, only about half of the people bow toward the altar before entering a pew. A few (I am one) purposely sit on the left side where the Blessed Sacrament chapel is, so they can genuflect in that direction. But gone is the beautiful and meaningful Catholic custom of everyone genuflecting toward Our Lord in the tabernacle. Children are not taught this, and that is a great loss.