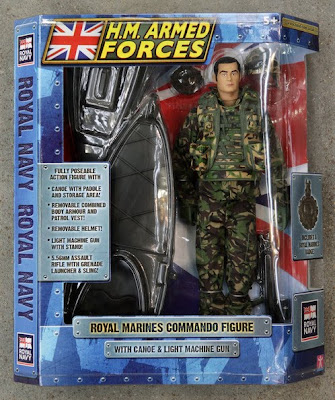 The must have toy this Christmas, for every youngster targetted by the Government in a cynical attempt to create new recruits for the next war in some backward middle eastern country with notoriously tricky terrain.

Public approval of the wars in Afghanistan and Iraq are on the decline. The Government therefore are targeting the very young in order to keep a steady stream of little heros and heroines coming into the Army in order to 'Be the Best' and lay down their lives in an unending war of attrition, the reasons for which were, looking back, highly dubious.

So, when you open a copy of the Argos catalogue today, you will find two pages devoted to these delightful, official H.M. Armed Forces figurines which presumably have been designed to encourage small children to re-enact shooting scenes set in hot, hostile and violent regions of the World with brown faced dolls with bits of towel or fabric wrapped around their heads.

Timmy: "Kerpow! Bang! Crash! Take that you Taliban insurgent! And that! Neeeeeooooow, I need back-up, boys! Send in the bombers! Ch-ch-ch-ch! Neeeeow! Boom! Prepare to taste democracy and die, you evil Taliban man!"

Mother: "Timmy, your friend is at the door."

Mother: "Its your friend from school, Mohammed. He says he wants to come and play...."

Small boys have played with toy soldiers for generations. Most of them grow out of it.

That's the wrong uniform for Iraq and Iran. The doll is dressed in woodland, the army is issued with desert pattern. Which apparently is not working too well as the army is operating in wooded areas and desert camouflage is conspicuous.

It was the gays who first made camo popular on the streets.