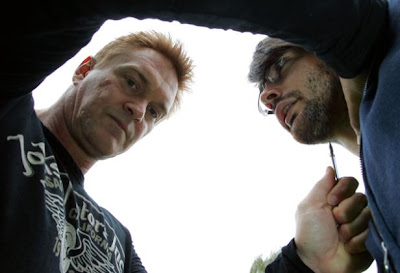 According to the Independent, a Californian marital arts expert has arrived in Slough with a radical new technique of 'self-defense', for those concerned about walking the streets alone at night. Unfortunately, the technique doesn't involve pointing in the sky and shouting shouting, "Oh my God, its the Lord's Second Coming!" before running away. Neither does it involve a quick kick to the groin and scarpering. Neither does it even involve saying, "Take it all, take it all, just spare my life! I've got kids you know!"

No, it involves learning to kill someone in just four moves, which, I'm not sure quite describes 'self-defense' but how to achieve a charge of manslaughter. I'm quite sure some of the workshop attendees who show up to learn the techniques from Tim Larkin will be some of Slough's more unsavoury types who take a dislike to certain people and might just go on the offensive. Call me a chap with a pessimistic view of human nature if you like, I just can't help feeling such knowledge is open to abuse!
at September 25, 2009

Has anyone every checked out Larkin's Target-Focus Training website? Or seen any of his materials? Or bothered to attened a class?

If you had, a few things would jump out very quickly at you:

1. He isn't from California (does anybody check any facts at all, or don't they matter?).

2. He never advocates killing. And he states over and over, learning this has one and only one use: in a life-threatening attack where you fear bodily harm. Everything else, he advocates walking away from much to the dismay of some hard-core types who think you have to fight. Read his stuff: he tells you, what if the guy has a bad heart and you hit him just to teach him a lesson, and he dies. You're screwed. Better to walk away. Unless there is not other option. Because then, if only one of you is going to walk away, you'd better know how to make sure it's you. And figuring out how at that point in time isn't going to work.

3. He has said it over and over: the bad guys never attend one of these trainings! Why would they. They already know all this stuff: how to injure or maime or kill you. They don't need to take a class on it. They just do it to you.

4. Read the testimonials of people who've attended the classes: they all say that afterwards they are less likely to get into a fight than before because now they realize how easy it is to injure another person.

All the ranting does is keep good people who need to know what to do in an absolute worst case scenario from learning how.

I took the training and it's nothing like what the media is making this out to be. What it is is life changing.