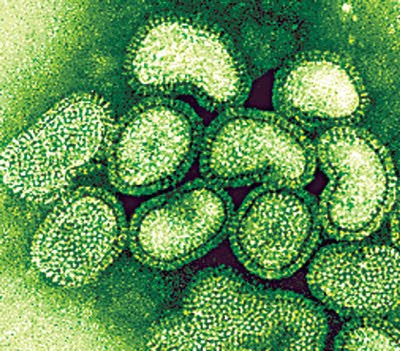 This is an urgent public health warning. Hot on the trotters of Swine Flu a new and deadly virus has swept the nation. Thérèsteria, which is thought to have originated in an obscure French town a couple of hundred years ago, has spread across the channel to the United Kingdom. Initial reports suggest that the new strains of the virus are highly contagious and affect particularly Catholics, both lapsed and practising and militant atheists in differing ways. The frightening disease results in a shocking phenomenom of religious expression among Catholics who begin to mutter prayers before the relics of St Thérèse of Lisieux, and are unable to withstand an inner desire to touch the Chassis containing the relics of a holy woman who they believe is in Heaven. This is a mild version of Thérèsteria the consequences of which appear relatively positive, with sufferers feeling comfort and protection and what some sufferers have described as "Heavenly assistance and consolation amid trials in this vale of tears."

Thérèsteria affects other victims in a different and more profoundly disturbing way, leading militant atheists in positions of influence to write tyrannical rants in The Times, The Sunday Times and The Guardian. Other symptoms of this strain of Thérèsteria among atheists include sweating, sudden paroxysms of irreligious spite and public demands for bones to be banned, whether in persons dead or alive. Some have suggested this could even lead to the banning of the practise of touching people altogether and especially anyone with bones, because bones are highly dangerous and of grave and terrible threat to individuals and society. For these sufferers, the only cure is to take Parris-etemol three times daily. Towns and cities have ordered vast quantities of 'Jenkin's Jabs', an anti-viral injection which is said to combat the disease even though sufficient tests on its efficacy are still unavailable and there is little or no visible proof for the claims made by the manufacturer. Other cures include the less credible 'Just-a-Minette', which leads sufferers to within one 'Minette' of reading a Times column, feel sick to the stomach of the arrogance of atheists to impose their angry and venomous disbelief on the not insignificant number of Catholics resident in the United Kingdom.

If you are suffering the more mild, pleasant and redemptive strain of Thérèsteria then the Vatican advise that you alert the Holy See to graces received or any miracles obtained by the Little Flower and generally go around telling people of your new or renewed devotion to one of the sweetest, most innocent, gentle, humble and charming Saints of all time.

If you feel you are suffering from the less innocuous but more virulent and violent strain of Thérèsteria and are suffering any symptoms such as injured pride, confusion, sweating, sudden violent, unholy and heretical outbursts against God, Our Lord Jesus Christ, the Holy, Immaculate and Blessed Virgin Mary and the Holy Saints of God, then it is advisable that you repent of your ugly heresy. At the very least, the WHO advise that you, 'Chill the **** out and let Catholics do what Catholics have been doing since the Early Church venerated those raised by God to be Martyrs, Saints and Blesseds and that those who were so honoured and graced by God were then raised to the Altar, so that believers may share in their glorious merits and know their powerful intercession before the Throne of Almighty God, lest you become so violently angry that you spontaeneously combust.'
at September 20, 2009