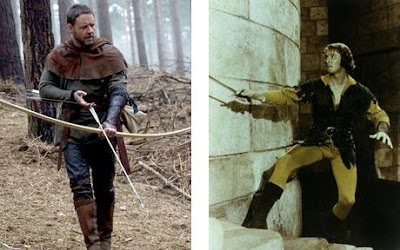 I've been getting into Robin Hood on the BBC recently. I'm a sucker for the tale of the lycra tight wearing, Sherrif of Nottingham evil-plan foiling, lover of the poor and holy Friar Tuck and band of men inspiring, English legend.
It turns out the Gladiator star, Russell Crowe, (cue hoards of ladies and men with an intrinsic moral disorder swooning and sighing) is to play Robin in the new Hollywood blockbuster. Can he match Errol Flynn? The jury is still out, but I'm booking a ticket as soon as its released. I can't wait...Ridley Scott's $130 million epic is beginning filming as we speak and Cate Blanchett is to star as Maid Marian (cue hoards of men and ladies with an intrinsic moral disorder going "cor blimey guvnor" in unison).
I was under the impression that Robin Hood never got Maid Marian in the original tale, and devoted himself to the holy mission of rescuing the poor from the miserly clutches of the money-hoarding rich of Sherwood. Remember, this is Hollywood, though, so she'll probably get her kit off anyway, along with him. Bit sad that the leading characters of this quintessentially English legend are from Australia and New Zealand respectively, but hey, you can't have everything.

Here are some for starters:
http://www.communautedelagneau.org/communaute-de-l-agneau-anglais.php

I have set Notburga to google for the chap who advised the Polish Franciscans who I mentioned a while back (because he seems to have worked in Vienna). The Polish chaps are still at it. So are some Italian ones (did I send you the link?) None of them look very traddy, though, alas.