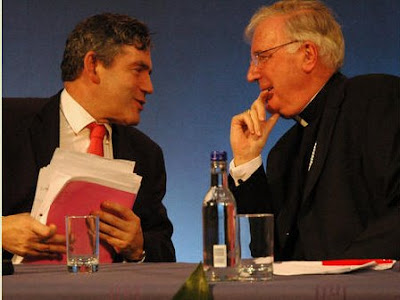 But does this mean those with an apostolic mission should get this close to them?

According to BBC, the Cardinal has spoken of the rumours he is to become a Lord in his retirement from his position as Cardinal. "My predecessor was offered a place in the House of Lords and chose not to accept it and felt that he had a better voice, if you like, outside of Parliament by being a religious leader and there is a bit of me that would feel the same" [The wise, humble, sensible and holy bit?]

"I think that the prime minister wants to bring religious leaders into the House of Lords to make sure that their voice is heard [co-opted].

"That obviously wouldn't just include myself as a Roman Catholic but also the Chief Rabbi and a prominent Muslim perhaps, because he thinks that these kind of voices in public life have a value." [Sounds like BBC Radio 4's 'Thought for the Day']

Cardinal Murphy-O'Connor also explained that he had been able to speak to the prime minister whenever he needed to during his tenure.

He said: "If I want to speak to the prime minister I can speak to him, put it that way." [Hopefully, His Eminence tells him in no uncertain terms of the outrage of the whole Church at the Human Fertilisation and Embryology Bill, the Equality Act and a whole raft of legislation limiting liberty both religious and civil].
at April 17, 2009