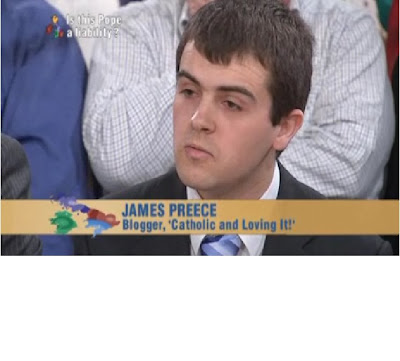 A Catholic Blogger, James Preece, who blogs on his, 'Catholic and Loving It' site, has valiantly defended the Holy Father...on TV! Check out the story at 'My Heart Was Restless', the faithful musings of a young Catholic in Yorkshire. Check out her conversion story too, very good. Incredibly, in the TV show The Big Questions, 'the topic of discussion this week was "Is the Pope a liability?" Nicky Campbell introduces the panel, which includes the former advisor to Cardinal Cormac Murphy O'Connor, Sir Stephen Wall, who "thinks so [that the Pope is a liability!]".

Sir Stephen Wall describes himself as a "recently lapsed Catholic" calls the Pope "accident prone" and "plain loopy". He says that "the Catholic Church's views against morality have changed" and that the Holy Father's views are "deeply offensive". Meanwhile, James Preece defended the Pope saying, "the language of love is sacrifice... the Pope is willing to be as unpopular as Christ...What the Pope is trying to do is lead people to a life liberated by Christ. If you are leading your life defined around sex, the Pope is to be expected to advise against that", he said.

Apparently, he was so delighted to be on TV that he gazed into Heaven and waved up towards the the Blessed Virgin and said, "Hi Mum!"
at April 20, 2009

Thanks for the link, Laurence. God bless.

Didn't he do well! He was cool calm and collected, without hesitation. An excellent spokesman for the Faith. It must have been daunting with the anti people in the chair - why do the BBC always get 'experts' on religious programmes who are anti?

Thanks also for the other link. I had actually read this young ladies Conversion Story recently. I never tire of reading about other people's conversion stories and finding out how they came to discover the True Faith.

The Holy Spirit gives us wisdom for how to answer those who persecute us:

Luke 21:14-15 Settle it therefor in your minds, not to meditate beforehand how to answer; for I will give you a mouth and wisdom, which none of your adversaries will be able to withstand or contradict.