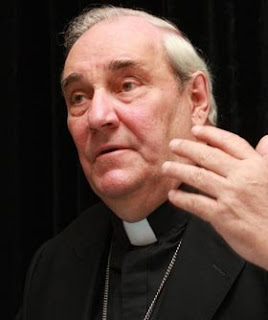 Thanks to 'At Home in My Father's House', new story from Life Site Daily News.

It's always a bad sign when someone says something beginning, 'Personally, I am against...but...," because it usually means that they are really for it, like all those people who at the next election, in communities ravaged by unemployment will consider voting BNP, telling friends in the pub, "Now, I'm not racist, but..."

Over the Easter weekend, Le Devoir newspaper published a story based on an interview with Cardinal Jean-Claude Turcotte of Montreal, during which the Cardinal contradicted the teachings of Catholic Church on abortion and condoms.

In the interview Cardinal Turcotte, as quoted by Le Devoir, compared abortion to killing in self-defense, effectively equating the unborn child with a violent aggressor. "Personally, I am against murder," he said, "but can understand that sometimes, when someone is being attacked, they need to kill someone in self-defense. I am against abortion, but I can understand that in certain cases, there is almost no other choice than to practice it."

Turcotte made the comments in the context of addressing the announcement of the excommunication of those involved in the abortion of the twins of a nine-year-old Brazilian girl. He called the move by Brazilian Archbishop Cardoso of Recife, who had announced the excommunication, a "clumsy move."

Turcotte had also criticized the excommunications earlier, in a statement released in March, in which he said that the situation in Brazil called for a more "evangelical" approach.

Turcotte had said he was "pleased" to learn that the bishops' conference of Brazil had distanced themselves from their fellow in Recife.

During the recent interview, Turcotte also addressed the controversy over Pope Benedict's remark against condoms during his recent trip to Africa. According to Cardinal Turcotte, it would be "ridiculous" to suggest that the Pope said condoms should not be used.

"Essentially, the pope said that it took two things to fight this disease, the means, but also a change of mentality. He pronounced this sentence to show that condoms were not in and of themselves the perfect solution; we took his words out of context and all this was largely amplified," said Cardinal Turcotte.

"As if the pope had said that condoms should not be used. This is ridiculous! When someone has AIDS, it is his or her responsibility to protect the people with whom he or she has intercourse."

You remember that BBC story about the survey of sins in confession?

Utter bollocks. No survey, no confessions, no statistics.

A man wrote a book about the capital vices in St Thomas. Another man wrote an article about the history of the notion of the capial vices. Four sentences from the end he makes a casual comment about "folk tend to have different problems, eh?". From this somoene came up with the tale of the results of a survey of confessions.

Or the pope's answer about condoms on the plane to wherever it was he went first.