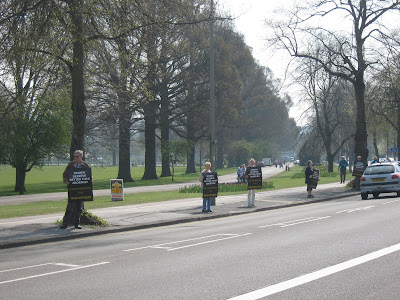 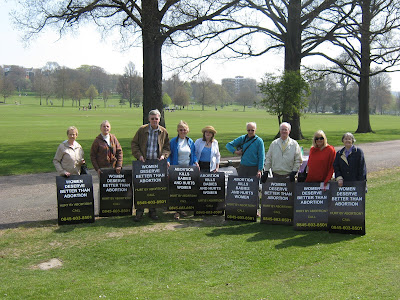 Local pro-life activists and representatives of Brighton's division of the Society for the Protection of the Unborn Child (SPUC) held a 2-hour roadside protest today on Preston Road, Brighton.

With the Saturday sun shining and day trippers from  South of England and beyond flocking to come to Brighton, parts of Preston Road were gridlocked between 11 am and 1pm, when the protesters arrived for the demonstration this morning.

I just happened to be passing myself in the car, so I stopped and took a few photos of these men and women standing up for the unborn. Just before stepping out onto the road to go over to the other side to get a good picture, a car drove by and I heard a man shout out at one of the protestors, "F**k off!"

That was only at 11am, just as the protest started, so I wonder just how these brave souls fared for the next two hours.

I couldn't stop for long myself as I was on my way somewhere, but was glad that I had managed to talk with the organiser and take a few photos of these men and women who, I do not doubt for a second were on the receiving end of more than one or two insults.

Judy Law, representative of SPUC, who organised the roadside protest said, "Today's protest is an annual event and this year it marks the 42nd anniversary of the passing of the Abortion Act in 1967. We come here every year to protest against the tens of thousands of abortions carried out in the UK every year."

There were, as far as I could see, at least three parishioners of St Mary Magdalen Church present at the roadside protest. The protestors carried signs saying, 'Women deserve better than abortion' and 'Abortion kills babies and hurts women.' 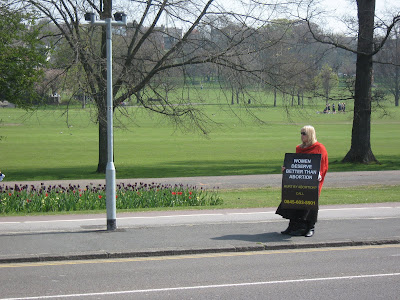 I asked Judy whether the Brighton SPUC group had considered a similar protest outside Wistons Clinic, the local abortion centre ran by the British Pregnancy Advice Service (BPAS).

She answered, "Some time ago we did try with the help of another pro-life group to protest with photographs of abortions outside the clinic but were moved on by the Police pretty soon. It would be good if we could hold a demonstration there in the future or organise similar protests to this more frequently."

I put my name down on the SPUC's list for further information at a local level and would like to join the local group. I wasn't aware that one operated in Brighton.  The roadside protest is a good idea in terms of exposure to the public and visibility. A dignified presence outside Wistons Clinic should, though it has been tried before and stopped by police, be encouraged.
at April 24, 2010