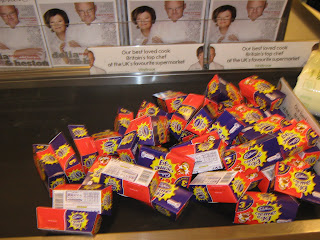 Left: A young man was photographed buying these Cadbury's Creme Eggs from Waitrose. Insiders in the Vatican suggest this misappropriation of funds could lead to the biggest crisis for the Church since the last one. Sources close to Ruth Gledhill of The Times say this scandal goes right to the top of the Church. It could bring down the whole institution like a multi-layered wedding cake being carried by a one-legged man on stilts. If the Pope wasn't there at the time, he most certainly knows about it and is allegedly involved in the insidious cover up. 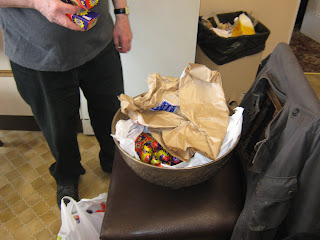 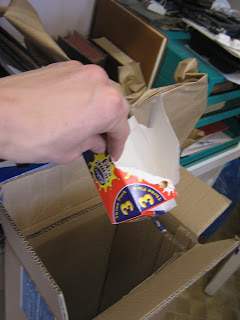 Above Left: Evidence of a cover up. As if this scandalously joyful event of the Easter Vigil, marking that day on which Christ triumphed over sin and the grave, could not irritate the media enough, above is a picture of a parishioner of St Mary Magdalen Church, Brighton, covering up the Creme Eggs bought from the pennies of poor beggar children, mostly orphans, kept, against their will, as they are, in the Church belfry, in a shocking display of Easter defiance directed, as it clearly is, against the victims of the abuse scandal, all of whom are outraged by the latest attack on them by AN EVIL CATHOLIC CHURCH and a NAZI POPE!

Above Right: Yet more evidence of a cover up as the Creme Egg packets are placed with both conniving genius and criminal deviance into a big cardboard box which is said by insiders to have acted as packaging for the 2010 Pascal Candle. We have to begin to ask...IS THERE NO END TO THESE SCANDALS? The Priest's position surely now is untenable and Dr Rowan Williams has denounced the Catholic Church in Brighton as having 'lost all credibility' since it is not only guilty of a MASSIVE MISAPPROPRIATION OF PARISH FUNDS (Initial estimates put the final bill at £38, however, more stories like this are bound to emerge and engulf the Church in a veritable tsunami of scandal) but the Parish appears to be guilty of not recycling any of the packaging mentioned. The Health and Safety Executive, the Police, the Council, local religious leaders, the Mayor, The Argus and George Clooney have all condemned the scandal and the MASSIVE COVER UP that has both the Catholic Church in Brighton and the Pope, who was told about it by at least one Cardinal, more than 20 years prior to the event actually taking place, reeling.
at April 03, 2010

Sorry misspelling in previous post. Should have read:
I love your post on the latest "scandal". Thanks

Love it Laurence - well done! I was one of the lucky ones to have an egg thrown at them though I missed it and retrieved it later from under the pew! It was delicious.

For some strange reason I was unable to access your blog yesterday - every time I tried the computer took me back to blank page with the little picture thingies (no I don't know any of the technical terms). Very strange. Decided to try once more today and it worked!

Happy Easter to you and M. And keep up the thoughtful blogging.

Nice one! Nothing like making light of a massive child abuse cover-up to lighten catholic spirits in these gloomy times. The media eh; what are they like!? Next they will be complaining about care homes that have covered up child abuse. I hope you'll do a curly-wurly satire and savage them on that too

If the media DID put it into perspective of a wider problem of abuse, I think I'd respect them more.

If the media DID actually report facts in this scandal I think I'd respect them more.

Since they report neither facts nor the wider problem of abuse, they are wide open to any kind of satire we can throw at them.

Did you ever see that Brass Eye episode, 'paedogedden'?