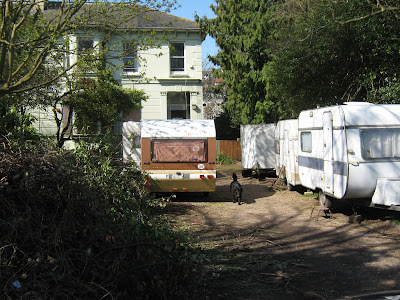 I returned home one day last week having dispensed of some pretty foul smelling garden refuse from my client at Preston Park and found this makeshift caravan site on Preston Road, so, obviously, peeps, I took a peep and discovered more than I thought I would.

We all know how well-trained in 'diversity' are our beloved Brighton and Hove City Council, but they are not so well trained that they include travellers or people who choose an 'alternative' lifestyle. 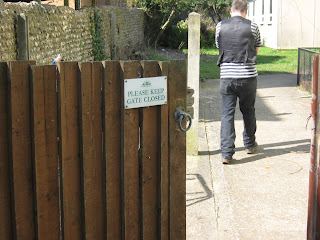 I found one member of the community, Johnno, talking on a mobile phone at the gate of a disused Council building on Preston Road. Irony of ironies, given the plight of my friends, Johnno informed me that the site used to be temporary housing for the homeless owned and ran by the Council, which was closed down some time ago. Johnno and the travelling community decided that it would be a good place to park up and live, given that the Council had obviously given up using the land for those without homes of their own. Clearly, the Council decided that the homeless were best served by 'private' owners who could exploit the poor both to their own ends and their wicked heart's content. 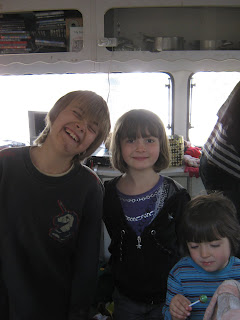 He lives here with his children. He was making his delightfully friendly children cheese on toast when I took this picture.His wife died some years ago, but they live happily as a family here. He said he wanted to give them homeschooling but in the end allowed the State to do that since he realised he couldn't teach them well enough himself. His legal struggles with Brighton and Hove City Council go back some years, as he and his travelling companions, many of whom also have families, have been embroiled in disputes over land for a long time.

The Council claim, apparently, or should I say, allegedly, that they need the land on which the travellers have settled, though quite what they need it for is highly dubious, given that they have grilled up the actual building and it remains empty while many more than the Council's estimated 7 men and women sleep rough in Brighton every day of the year. I don't know, perhaps they've come to an arrangement with Tesco or something, because doubtless Preston Road is in dire need of some kind of supermarket, given the terrible lack of outlets for multinational food chains in the city.

"It is so difficult," Johnno said, "to find any land on which to park and live in peace". The Council seem to hound these travellers and move them on wherever they go and although the living choice of travellers may appear odd to those of us who live in more urban or suburban accommodation, I am surprised, if not that surprised that this is one group of people who are deemed by the Council to be living a lifestyle that is clearly not in-keeping with their loving adherence to the State's vacuous, exclusive and patently biased obsession with the its unholy doctrine of 'diversity'. Let's put it this way, were 'Diversity' to be a night club, you wouldn't be able to get in if you were wearing trainers or the bouncer just didn't like the look of you...
at April 13, 2010