With the humanity and personhood of the royal fetus now firmly established by the pro-abortion mainstream media, betting agencies are opening new angles on the baby that would be King, or Queen.

This picture (left) was taken in a scan of the royal womb and, incredibly, not only does the baby already appear to be already wearing a crown, but the lining of the royal womb is, as many suspected, draped in a union jack flag.

A representative of the British General Medical Council, speaking of the image, said, "This really does show that the royal baby is royal and a developing person. It also tells us something about genetics - that such a thing as a 'royal bloodline' really does exist in its superiority. This image totally supports the pseudo-scientific claims made by geneticists and neo-eugenicists about genes and social worth."

Asked whether the news of the personhood of the royal baby should have any implications for the status of all developing unborn babies, from embryonic existence to birth the GP simply answered, "No, especially not those with congenital defects."

And who can argue with that? Up with the royals! Over recent years, scanning technology and medical advancements, photography and film of the inner workings of the womb have developed so much that advocates of abortion have been forced to perform veritable fetal somersaults in order to deny the humanity of the unborn.

From unborn babies yawning to sticking two fingers up at cameramen, to dancing to music, the unborn child in the womb has been given a new lease of life under the camera - - until they're lives are snuffed out by Marie Stopes and BPAS, of course.

The royal baby has stunned pro-life and pro-abortion advocates equally by clearly mouthing the words to Handel's 'God Save the Queen' before its twelfth week of development - in Latin - something which the GMC insist is more evidence of the greater social worth of the royal baby.

But with the media clamour over the royal baby reaching fever pitch, betting agencies are now taking bets on whether the royal baby will be B, L, O, B, G, O, S, Q, U, A, T. This sexual orientation and gender identity key has taken on something of a developing nature itself, starting just with G (Gay), then moving onto L (Lesbian), only later to develop into B (Bisexual) and later still, T (Transgender). More recently, the sexual orientation and gender identity key developed U (Unsure), Q (Questioning), (B) Bestialsexual (O) Omnisexual, A (Asexual) or O (Other) and later still than this, indeed a most recent addition - S (Straight). As we know, only 1 in 200 babies are born straight.

Ben Summerskill of Stonewall said, "We're really hoping that this baby will be a homosexual. For us, a homosexual on the royal Throne would be something of a publicity coup and would raise the status of the gay agenda in Great Britain. Who knows, perhaps one day we could see our first royal gay wedding? What a royal and truly gay day that would be! If that happened, then there would be a royal wedding that the gay community could celebrate with the rest of the nation. Then, no matter what gender the baby is, we'd definitely have a queen on the throne!"

Summerskill continued, "Obviously, if the baby is transgender then that would be great for the transgender community as well. While the recent scan shows a union jack flag, rather than a rainbow, initial images of the royal baby don't fill us with hope, but the science on the 'gay gene' is still a work in development itself, yielding, as it has, a complete lack of evidence that the condition is genetic." 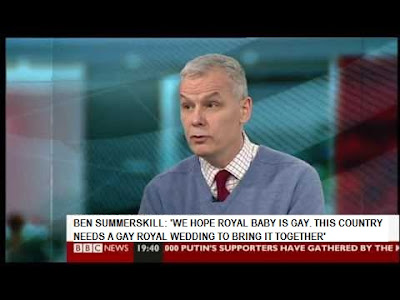 The Royal household, meanwhile, refused to comment on the potential sexual orientation or gender identity of the royal baby saying that the couple and their unborn baby would like, at this time, their 'privacy to be respected'.

As international interest in the royal baby intensifies, the run up to the birth of a future King, or indeed Queen, will see a renewed interest in the United Kingdom in the whole subject of marriage, children and family life which could inspire another 'baby boom' in the country. The Government is said to be very concerned about the possibility of renewed interest in such subjects and will be, according to one minister, 'watching trends in marriage and births with a very concerned eye.'

BLOBGOSQUAT joke is credited to Bruvver Eccles
at December 08, 2012

I've been trying to make a word. Add Asexual, Omnisexual and Other and we have BLOB GO SQUAT.

I haven't the words to do justice to your satirical genius! Thank you.