Who Supplied ACTA with a Safe Haven?

The Catholic world reacted with shock this week when it was revealed by a leaked memo on a parish newsletter that 'A Call to Action' (ACTA), the terrorist organisation which online intelligence agencies suspect to be linked to overseas dissident organisation 'Call to Action' (CTA), are alleged to having been supplied with sanctuary by President of Evangelisation and Catechesis, Bishop Kieran Conry. It is also believed that the ACTA splinter group have used weapons of Mass-destruction on their own people in the past and are intent on doing so again. 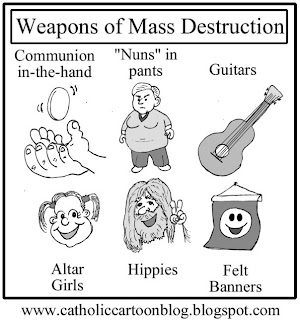 CDF inspectors are already based in Caterham, in the Diocese of Arundel and Brighton, trying to assess whether ACTA have used weapons of Mass-destruction on their own people, but because the rebels are spread out over a large area of England, forming their own cells in different regions, inspectors maintain it is difficult to assess at the current time whether they have been used on the Faithful.

It is alleged that among conventional WMDs used on civilians, such as guitars, Communion in the hand, 'extraordinary' ministers of Holy Communion, altar girls and felt banners, a lethal toxic spirit has been used on the Faithful, emanating from the mouths of pastors of the Church, that puts its victims at ease and leaves them doubting in the existence of sin, Heaven, Hell and the need for Confession and to reform their lives.

Intelligence Points to Caterham as Base for Rebel Hideout

Intelligence agencies have gathered credible evidence that Caterham, Surrey, is to be a focal point for the group of rebellious and dissident militants who seek to overthrow the teaching authority of the Church, known as the Magisterium, as new attempts to undermine the Church's authority are endorsed by the violently sectarian terrorist organisation that many have described as 'fundamentally Protestant'.

A full-scale land invasion by forces loyal to Rome is considered unlikely at this stage, but it appears possible that the Surrey region will be hit by a aerial bombardment of miraculous medals, scapulars and penny catechisms in an effort to bring the dissidents to the table for talks. If these efforts fail, Rome may resort to more severe means in order to contain the rebel faction known as ACTA, though such talks is said to be 'sabre-rattling'.

It is unknown yet whether Rome General, Pope Francis, is aware of the gathering in Caterham and what, if anything, he will do about it, since rebels, including those who support and arm them within the Church perceive a general relaxation in discipline and doctrinal teaching in the papacy.

It is feared by forces loyal to Rome that while Pope Francis himself is orthodox in Catholic belief, the atmosphere of his papacy is being perceived by dissidents, rebels and liturgical terrorists as giving the green light to what has been dubbed a 'schismatic Spring' that is taking place across the Church around the West in particular.

With His Holiness's emphasis on 'dialogue, dialogue, dialogue', the rebel forces see such quotes as an endorsement of dialoguing endlessly about their campaigns for women's ordination, an end to priestly celibacy, a 'new way of thinking' about marriage, divorce and remarriage and a new vision of the Church that does away with such matters as sin and Salvation.

Questions remain for President of Evangelisation and Catechesis

While CDF inspectors ascertain the truth as to whether President of Evangelisation and Catehesis, Bishop Kieran Conry, has given his personal approval to the ACTA terrorist cell meeting, forces loyal to Rome are disturbed that a Prince of the Church should be perceived to be permitting the rebel splinter group - alleged to have WMDs in their possession and to have used them in the past - sanctuary and refuge in a Surrey-based parish.

Rome is by now aware of the encouragement the ACTA rebels gain in their cause when permitted to find sanctuary in any Diocese of the Catholic Church in England and Wales and will be concerned that they have found a foothold in Arundel and Brighton. More updates as they come in...

I think this is an excellent post, but who am I to judge?

"‘A Call to Action’is a new ‘movement’ comprising lay, religious and ordained Catholics who are anxious about the future of the Church in the UK."

Wow, I am certainly anxious about the future of the Church in the UK and mainly because of the activities of people like this. Why can't they just join the Anglican 'church'?

This made me laugh out loud, as quite a few of your posts do- so thank you for keeping me cheerful during what strikes me as a rather wintry period for orthodox Catholics.

Bishop Conry has always struck me as something of a loose cannon, even by the standards of the E&W bishops' conference. The first time I came across him he was arguing against frequent confession on the grounds that people simply kept returning and confessing the same sins and so obviously weren't 'converted'. As if one confession magically turns you into a saint. With 'leadership' like this, no wonder people don't bother.

Spot on. ACTA are nothing but an umbrella organisation for every 'liberal catholic' going. At long last they've decided to go national and try and start a grass roots rebellion at parish and diocesian level. They have to because time isn't on their side anymore.

Actually I think their WMDs are redefining these doctrines in a 'liberal' way.

Further, I suspect they'll try to push the idea that you can separate Christ from His Church when you can't (He who rejects you, rejects Me)[ Lk10:16]. In that way they can say "that was then, this is now", there's a historical Christ and a Christ of faith. And the Christ of faith just happens to be a liberal!

Is that your guitar in the picture??!! You are so very talented! Being unashamedly repetitive, I will say: you deserve much wider circulation. Have you offered pieces to certain Catholic or secular papers?

This is quite controversial. I've read in some posts that the Catholic church is worried that by the year 2020, the majority of the people in the UK will not anymore be Christ believers. I would like to have a call to action myself, to people who are concerned about the future of the church and the faith of Christians who is starting to dwindle.

You say: " Rome may resort to more severe means in order to contain the rebel faction known as ACTA, though such talks is said to be 'sabre-rattling'"

Unlikely as I am afraid memories of the Armada debacle still dominate thinking in what remains of the Holy Roman Empire i.e. the Vatican.