I really do wonder sometimes. Let's just imagine for a while that a some Muslims, or even some Catholics, got together and got loads of guns, ammo and bombs from a nation friendly to the idea of an uprising against HM Government, that gave us such nuggests as 'gay marriage' and abortion - the killing of citizens in the womb by the State.

A whole gang of people have been sent loads of weapons and ammunition, rockets, guns, you name it. Do we really imagine, in such a scenario that a leader considered illegitimate in the eyes of these two communities would be asked to join David Cameron for friendly talks around the table? Or would, instead, the full force of the State be brought to bear in order to impose order and the rule of law on the civillian population, the armed combatants imprisoned, probably slain?

I don't think, in such a scenario, in an attempt to topple 'democracy' in order to replace it with something more 'reliable' and 'stable', like monarchic rule or theocracy, the Catholic or Muslim militants would be given much time or show much mercy. I don't think it would be long before, should a 'civil war' break out, the armed forces would be slaying the militants left, right and centre, by any means at their disposal. 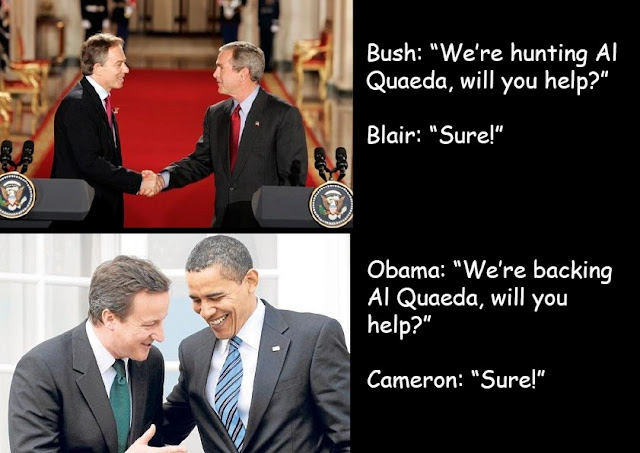 From what I've seen, I'm not convinced Assad is responsible for the chemical attacks anyway. Exactly how long would a rebellion against what more or less constitutes a masonic government in the United Kingdom be tolerated? How long would the rebels last? My guess is not long. Perhaps, in such a scenario, some foreign nation would intervene to launch a humanitarian war. Perhaps, but would it really be in their economic, political or natural interest. My guess is only if there were some serious natural resources at stake.

The seriously disturbing thing is that the UK and the US are arming more or less the same people they were 'hunting down' in the wake of 9/11, from Afghanistan to Iraq and beyond. Obama is doing what George W Bush did only while holding his hand up in a 'peace sign'. I find it rather incredible that the nobel peace prize winner could end up leading us into WWIII, but there we go. I guess that's kind of what antichrist's do.

We are most likely looking at a classic 'false flag' operation which has been in planning for at least a year.

The Daily Mail reported back in January of this year of a plan to launch a chemical attack and blame it on the Assad regime. It was removed this week but can still be found on the 'Way Back Machine':