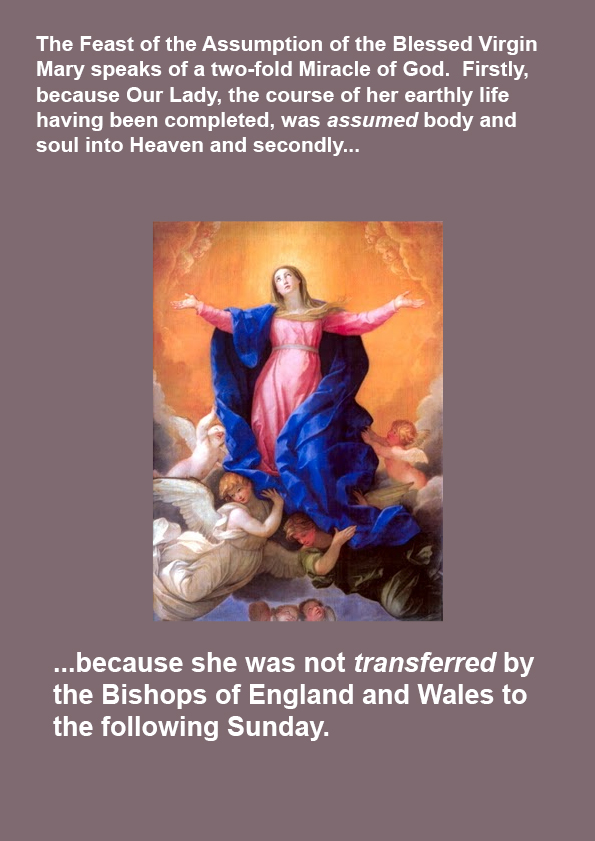 Straw poll in Catholic Spain. Having asked three locals in Finestrat if Thursday was a fiesta and they all told me it was; asked them what fiesta? They had no idea.

Straw poll continued: At my art class in Vilajoiosa, I asked the same question. Three people all over the age of fifty said they thought it was a religious festival but could not name it.

In a bar afterwards, recovering from this surprise with a caña of Estrella Galicia, I asked the barman. "It is the feast of the Virgen," he said, confidently.

"Her birthday?" I asked.

And back home have we been told it is a holiday of obligation?

Where is the logic in having solemnities of the Lord transferred to the Sunday but not those of Our Lady (Assumption) and the Saints (Peter and Paul)? At the very least I should like to see the Epiphany and Ascension Thursday put back to their proper day. I thought that the Bishops were going to consult on this a couple of years ago.

Here in England's smallest county we were most certainly told that August 15th is a Holyday of Obligation, with a newsletter reminder that so are all Sundays.

Interesting comment from frere rabbit. I had a similar conversation last week in Lourdes when a lady told me that she reckoned 3/4 of the population of France had no idea why August 15th was a public holiday. (Even in today's secular France)

She told me she had been in the hotel business and had to pay double to workers on the 15th. She used to ask them if they knew why it was a holiday - their reply was 'because it's 'le quinze aout' (August l5th). They did not however know what 'le quinze aout' signified.