St Charles Lwanga and Companions, Pray for Us 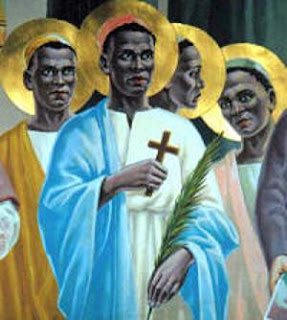 Two articles that are rather concerning today.

Viscount Astor has penned a piece for The Telegraph calling on the Lords not to throw out the 'same-sex marriage' proposal. Viscount Astor says:

'...to reject a Bill on a second reading that has been passed by the Commons, however strong opinions are, would be quite wrong. While it has happened very occasionally, it would be against the tradition of the Lords and would affect the relationship between the two Houses of Parliament. The Lords would be seen as an undemocratic chamber, not the guardian of democracy it often is.'


Lord Dear, however, was quite clear about the 'democratic deficit' that is contained within this legislation, saying, quite rightly, "There has been no royal commission; no committee of inquiry; no mention in any party’s manifesto prior to the last general election. Indeed, the possibility of its introduction was flatly denied by the leader of the Conservative Party in an interview on national television only three days before his successful election. There has been no proper public consultation, no matter how much the Government try to massage the results of what was, it has to be said, their limited consultation process."

The Telegraph also reports that Anglican Bishops are under pressure to abstain in the vote which will take place tomorrow. Thankfully, though, we can rely on Anglican Bishops not to bow to State pressure, because history tells us that, like Catholic Bishops, they have spines of raw steel.

St Charles Lwanga and companions, pray for us.