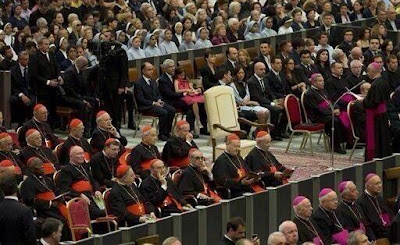 No pun intended, but I find the 'empty chair' image quite disconcerting. Far be it for me, a lowly, if not particularly humble layman, to criticise the Holy Father. I have to reserve my disquiet, since we are talking about the Successor of St Peter, under whom we gather as children of the Lord in unity.

Would St Francis of Assisi have attended a concert in his honour? No, but then St Francis was never a Pope, nor a Bishop, nor a Priest, and again we see here the striking discordance between the role of anyone who wishes to imitate the poverello and stand in the shoes of St Peter, Prince of the Apostles simultaneously.

The Lord Jesus knows what I've been thinking about the Holy Father's recent public action (or omission) and I'm certain that my thoughts have been uncharitable enough to warrant a Confession if only because we may not have the real/full story. Harbouring resentment and grievances is always wrong, and to do so against your spiritual Father, the Chief Shepherd on Earth, is not good. It is sinful, it damages our Faith and fosters discord and disunity. The good news is that 'out there', outside of the uptight Catholic blogosphere and in the real (virtual) world, there is universal applause for the Holy Father as evidenced by this Yahoo report. This is good because the Pope has won headlines again and even atheists are shouting, 'way to go, Pope!' with others saying 'This Pope might bring me back to the Church.' If that is the case, Deo gratias!

The problem is - and I've said this before - that with every bold, surprising, external gesture of poverty, simplicity and humility, His Holiness makes it more difficult for a Pope to enjoy some music with his Bishops and Cardinals ever again and makes Cardinals who enjoy Beethoven look bad, while His Holiness looks good, even though this was arranged ages ago. Let us be clear, however. The Lord Jesus sees into the heart. He knows 'what is in a man'. External appearances mean nothing to Him. That which rises high in the sight of men can be loathsome to God.

Maybe it is a bit indulgent to go to a concert in the Year of Faith called by the music-loving Pope Benedict XVI. Maybe the Princes of the Church shouldn't be publicly entertained with beautiful music. Maybe they should be out washing the feet of the poor instead. Maybe that's true, so maybe next year why not cancel this kind of thing and do something else more 'Gospel' orientated rather than the whole thing becoming a PR sensation and leaving some wondering if it is possibly a carefully manicured publicity stunt.

What I do not like about the 'empty chair' signal is that it could be interpreted that here we have a Pope who is willing to make others look bad in order to look good and to accept worldly honour while throwing his Cardinals under a public relations bus. It will displease many to hear it, but I consider it more sinful to seek headlines, fame and honour from the World than to enjoy a relaxing bit of Beethoven with your Brothers and, in this case indeed, spiritual Sons. Are we really saying that a Pope cannot be seen in public doing anything that isn't radical, public, touching or sends a potent Gospel message? Must the Pope always be seen 'doing' something radical? Is the Papacy to be transformed into a 'show'? Let's be frank. The Pope is still enjoying good headlines, but it was not 'great PR' and the admiration of the World that got St Peter crucified upside down.

Not every Pope will be like Francis, so how can any Pope come after Francis? What does the evidence of Francis's humility mean for perception of all of his predecessors? How can anyone be a 'normal run of the mill Pope' again? Humility is hard for all of us. It goes against our natural inclinations towards the elevating of the self. We are told to reject the Devil and all his pomp and all his works and all of his 'empty show'. As Pope, Benedict XVI had the humility to see that not everything depended on him. His critics often found it hard to see his own simplicity and quiet humility as he pointed to Jesus. The challenge to the critics of Pope Francis is not to recognise his great humility - because that is evident to everybody. No. Pope Francis's critics need to recognise Peter, under whose pastoral care we share communion and visible unity. Whatever our thoughts of the first months of Pope Francis's pontificate, he is the Successor of St Peter and where Peter is, there is the Church and where the Church is, there is eternal life.
at June 24, 2013

I think the problem is that we have grown coldly utilitarian in the church. We want to feed the poor man's belly and care not for things like art and music, beauty which feeds his soul. How concerned are we for the poor when so many artists and musicians have become poor because the Catholic Church no longer supports them?

Do we know why he did not attend? Could there be a simple explanation such as he was taken ill temporarily?

I am hearing from friends in Rome that Pope Francis may be a big disappointment to the liberals. Let us wait and see before rushing to judgements which seem to be based upon over-interpretation of relatively trivial incidents.

As a 'liberal' I can say with confidence that Francis is in no way a disappointment. He's only just 100 days into his pontificate and yet achieved a transformation in how the church is perceived, there will be more change to come I am sure.

Here is what has already been made public by Vatican Insider in the Italian. This was supposed to be for the Year of Faith and it was planned a while ago. From what was believed Francis was supposed to be there. Supposedly at the very last minute the Pope backed out saying an unexpected event suddenly came up and after telling an associate "I am not a Musical Pope. I need to work" He was in his room during this event.

False perception through false eyes. The Deposit of Faith is unchanged.

Pope Francis was not in his room all night but met with the papal nuncios who were in rome for a meeting. This was the first time he has met with them collectively since his election. He was discussing with them and putting the finishing touches to the inquiry into the Vatican bank announced this morning. Sounds like a very good and valid reason for not attending the concert to me!

The curse of the electronic 24/7 society- if you're at all in the public eye every little thing will be picked over. I'm sure there was a perfectly good reason for this, though I think it would have been nice to have offered the unwanted ticket to the other humble pope on the premises.

On a more serious level, you make some good points, as others have done, about how Francis' actions will affect his successors. We saw how John Paul II's 'remodelling of the papacy in his own image' as someone put changed people's ideas of what a pope should be and how he should act; Benedict, I think, tried to distinguish between the office and the incumbent for the time being; and now here is Francis, again putting his own stamp on the office. What I think more significant than an occasional lapse in manners or a taste for communal living is his apparent preference for being known as 'the bishop of Rome' rather than 'pope' or 'supreme pontiff'. Once you effectively stop distinguishing the bishop of Rome from the other bishops you run the risk of losing the concept of him as a sign of unity, as the one with whom all Catholics are in communion - and this would surely have implications for the future of the Church. But I've seen little comment on this.

I agree with you that for the Pope to keep referring to himself as the Bishop of Rome and to refuse consistently to refer to himself as anything other is a potential fundamental weakening of the papacy.