Can you sniff the scent of homophobia? Can you spot some homophobia from a 'long or short-range' distance? Well, meet the new range of sniffer dogs unveiled this week by Manchester Police which can smell even the trace of homophobia and prejudice against LGBT persons.

"Yappy are you when men revile you..."

A crack team of chihuahuas has been unleashed on Manchester in a new pilot scheme to clamp down on homophobia-related crimes amid controversial claims that the new team of dedicated foot soldiers combating prejudice is an attack on freedom of thought, speech and even conscience.

The 'hounds of homophobia'

While any moves to put corgis on alert for such undercover activity are said to have been blocked by Buckingham Palace, the elite squadron of chihuahuas are expected to be rolled out once the 'same-sex marriage' legislation is passed and Christian Monarch Her Majesty Queen Elizabeth II gives Royal Assent to the divisive and controversial law that will allow men and women to marry members of the same gender, putting such issues as consummation, adultery and a host of other issues in marriage in a grave situation, or even, the grave itself.

Speaking of the new breed of heroic homophobia hunters, a spokesperson for Manchester Police, PC Rupert Rabies said, "We understand that in the light of the new legislation there may be some citizens for whom the idea of 'same-sex marriage' might be a bit much, especially when they realise the kind of stuff that will be taught to their children."

He continued,"With this in mind, then, we thought we might need 'back-up' in the ongoing fight against prejudice and homophobia. This elite team of chihuahuas will be just the thing to combat hate and prejudice in the 21st century, since nine out of ten of our dogs can sniff homophobia, even thoughts, from 800 yards away. At this time when terrorism is still an ever present danger, be very afraid, this recruitment drive of specialist politically correct sniffer hounds will be a welcome addition to our force of anti-terrorism dogs."

'Did you just call me a woofter?'

The idea, imported after successful use in several US states is known already for its controversy. One of the British homophobia hunter hounds, Terence, responds to potentially derogatory words and phrases like 'queen', 'queer', 'gay', 'poof' and 'bi'. When PC Rabies was asked whether this kind of language could be used perfectly innocently in remarks that had nothing to do with homosexuality, he responded, "Yes, but these dogs have been specially trained to pick up on the inflections in the human voice. It's not what you say, they can pick up on the way you say it and alert officers to any homophobic incident immediately."

Of course, chihuahuas are not naturally political dogs, and so MI5 took time to train the new peace-enforcing pooches in their new role.

All the recruited team of chihuahuas were subjected to a series of pro-homosexual movies, soap operas, songs and plays, all involving dogs of the same breed over a long period of time, to enable them to accept what they had hitherto not understood as being wholly 'natural' to be virtuous and even heroic. PC Rabies said that as part of 'Operation Torpedo Marriage' films starring chihuahuas, such as Brokebark Mounting were shown to the dogs in order that they would acquire the sense or the 'scent' of homophobia in order to sniff it out in human beings in and around the capital, in shopping malls, libraries, airports and train stations - even - in future - in the workplace.

Blessed are the paws?

Anti-gay marriage campaigners and bilious, vitriolic hate-mongers who mostly nest in Catholic Church and other Christian denominations have reacted angrily to the news of the new breed of homophobia sniffer dogs, suggesting that the Government's attitude to those who campaign against the new legislation is 'dogmatic' and totalitarian and that Cameron and the Metropolitan Police should 'paws and think again'.

A Government poll however found that homophobia sniffer dogs are supported overwhelmingly by 97.3% of the population, despite the population not having been consulted and the move not appearing in any White Paper or party manifesto. The first homophobia sniffer dogs are expected to be rolled out in Spring of 2014, so if you're not convinced of 'same-sex marriage' by then, watch out, because it is rumoured that G4S have ordered a specially trained chihuahua for every adult in every major city to sniff out any anti-Government or dissenting sentiment as the new law comes into force.

Alarm has also been raised that the crackdown on any 'scent' of homophobia has already reached the digital communications division of GCHQ, and that the new breed of 'chihuahunters' are to be employed in hunting any signs of homophobia on the internet. Civil liberties campaigners are especially concerned in the wake of the NSA internet spying scandal that has rocked the digital communications world and had internet users wondering whether security services are profiling them for some future 'lockdown' when political dissidents could be purged and taken 'offline'. The world awaits a new dog-whistle blower to emerge who will tell us whether these chihuahuas are a force for peace and freedom or radical new tool in a future of oppression and tyranny. 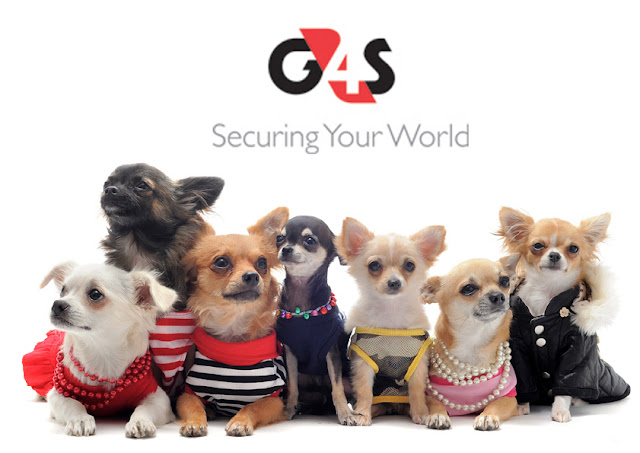 Aaaaah cute little puppies! Probably just as well such dogs don't exist as you would have a trail of yapping dogs constantly snapping at your heels.

Absolutely brilliant post! I haven't laughed so much for a long time! Thanks.

Why all this constant pandering and sucking up to the LGBT Community at all instead of attacking REAL TERRORISTS? The British government is trying to look out for only one small group of people what about the rest of us who are not LGBT? Are not all People equal in the eyes of the law? BTW there is NO WAY a dog can't "sniff out" Homophobia whatever the hell that is but not HETEROPHOBIA.

Hilarious! (In an horrific kind of way.)

Made my day--link on my blog