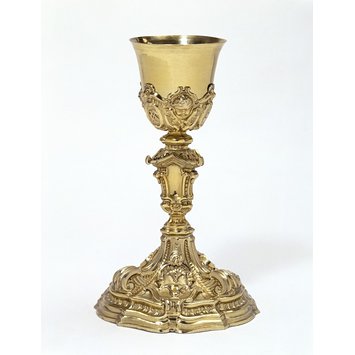 On Saturday, I had the opportunity to go up to London to the Victoria and Albert museum.

Walking through the collection devoted to ecclesiastical treasures, I, like others who were wandering around, gawped with amazement at the beauty of so many of the monstrances, chalices and sacred objects on display in glass cabinets.

It is hard to wander around an exhibition such as this and not wonder how much they would add to sacred worship today, nor get over the feeling that this stuff belongs in Churches.

It was also hard to wander around not thinking of the Benedictine monks of Chilworth who were so desperate to flog their sacred vessels at Dominic Winters auction houses. Indeed, the efforts to salvage sacred vessels from the monastery were not completely successful, though those who did fight against the sale and who managed to either purchase or persuade should be thanked and applauded by the whole Church in England.

The Victoria and Albert sacred stalls, at least, are not in 'lot' numbers and while it is sad these treasures are not in Catholic Churches, they are magnificent to behold.

The collection does a considerable job in teaching museum goers about the efforts and lengths gone to in the Baroque period to highlight the Church's teaching on the  Holy Eucharist. It describes the enormous attention paid to glorious, gilded detail in the design of chalices and monstrances which stood in stark contrast and defiance of the Protestant reformers' denial of the Real Presence.

I wondered whether, in the atheist utopia of Richard Dawkins, whether, having erased Christianity from all spheres of public life, an exhibition like this would survive, were the high priest of atheism to convince both Government and society of the rectitude of his increasingly fanatical beliefs. Given the reaction of many people who walked through, one would surmise that in the United Atheist Kingdom (UAK), exhibitions like this would be closed as being dangerous, seditious and a threat to the enforced stability of the atheistic paradise. Dangerous stuff, that religion. Still, after 2,000 years of persecutions, martyrs and suppressions, the Catholic Church has seen off bigger threats than Richard Dawkins. The Queen, it appears, is not amused by the new atheists clamouring for Christianity to be wiped off the cultural map. Perhaps President Obama will soon be 'prescribing' which vessels should be used for the Church in America. After all, once these worldly dictators start meddling, they find it hard to stop.

At the end of the gallery is a flat-screen computer monitor with a low Traditional Latin Mass from somewhere like the Oratory on a loop. So kind of the museum to do some free evangelisation for the Church. Anyone walking through the collection could have been mistaken for thinking that the Mass of Ages was the Mass of the Catholic Church! The exhibition really brings home the reality of the situation then, when so many inside and outside the Bride of Christ denied the absolute reality of the Eucharist, and the situation now, when a papal effort to renew the liturgy to point towards the Real Presence is well underway. Having asked one or two people how these sacred artefacts came to be in a museum, I was told that most of it is looted 'booty' from the Napoleonic times.

Clearly, the items in the Victoria and Albert were not donated by Catholic Churches, nor sold to raise money for nicer, more pleasant accommodation for monks. I was also reminded of the enormous efforts that my holy patron went to in order to hide the sacred vessels of the Church from the Emperor Valerian, sending some away and giving some surreptitiously to the poor to keep them hidden from the Roman authorities. An auction of the Church's treasures - legend tells us among the 'lot' of which was numbered The Holy Chalice, or Grail - it most certainly was not! A holy salvage and rescue mission it was, not entirely dissimilar to the work of blogging priests such as Fr Blake and Fr Clifton in alerting the global online Catholic community to the shocking actions undertaken by the monks of Chilworth.

May his holy intercession help the Church in England and Wales to recover the sacred in Her liturgy and remember that there is no reason why the Holy Sacrifice of the Mass should not still, even today, produce 'wows' and wonder from those who walk through Her doors and stumble upon the Mass. As long as we respect that that which was held sacred for previous generations is still sacred today, it is most certainly possible. Unfortunately, all people like Richard Dawkins have to do is fart and the whole country seemingly listens. The Church needs valiant and bold Bishops in the fight against anti-religious fanaticism, but surely the time has come for the Church in England and Wales to do something 'extraordinary', so that both the Church and the World may see the Glory of God in His One, Holy, Catholic and Apostolic Church.
at February 15, 2012