There's a new kid in blogtown. A school student from Lancashire has started a blog which very much looks like another fruit of the Benedict effect. His blog is called Corpus Christi Catholic. His blog profile says...

'My name is Brad Jacobs. I am a Catholic, and I attend St Helens Church Hoyland, Barnsley, England weekly. I am Head Server at St Helens and I am also one of the musicians. Oh and also a reader. One day I hope to be a priest. Follow me on Twiter.' 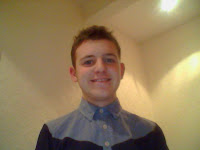 Fr John Boyle informs us that the youngster is 14/15 years of age. Keep him in your prayers, especially given that his hope is to be a Priest. Brad may not like The Eagles now, but you wait until your 35 m'lad.

There's a new kid in town in Brighton as well, though not quite so young and whose future does not appear to be so promising.  I would like to interview him for my blog. He struck me as unusual because unlike so many homeless of Brighton he has two large suitcases with him. He is called Peter and has been homeless for 36 days (he's counting). What astonishes me is just how easy it is to become homeless. I never imagined this could happen. He lived with his mother in London. His mother died and his name was not on the tenancy agreement. It's that simple!

He was evicted from the property where he and his mother had lived, being found to have made himself therefore 'intentionally homeless'. He found no help in London and has drifted down to Brighton. He has already contracted a chest infection and it is bitterly cold outside. He doesn't believe he will live long in this weather. He has no access to help here because he has no 'local connection'. He says that he would get more support if he were on drink and drugs but since he is not on either, he lacks 'vulnerable status'. He cannot get a referral therefore to various nightshelters in operation as the temperature in Brighton has plummeted. He told me he sits all day and all night outside the derelict old Blockbusters shop on London Road. Keep Peter in your prayers as well. I cannot imagine what it would feel like to lose your mother and then become homeless in winter in a matter of weeks.

I think that nowadays we often think that homelessness is caused by marital or family breakup, descent into alcoholism and various substance issues. It never crossed my mind that someone could be made homeless, literally, because their mother died. Yesterday was the anniversary of the birth of Charles Dickens, famous for depicting the cruelty and harsh poverty of his time. The question for Brighton is: 'Who gives a Dickens about Peter?'
at February 08, 2012

I think alcoholism and substance abuse often follow on homelessness rather than the other way round. They are seen as means of feeling warm. I have always understood that once the temperature falls to a certain level there is an obligation on the authorities to provide shelter whatever. Certainly this is what happened in Crawley.

Keeping Peter in my prayers. If he's under 18, then surely the local authority where he used to live should / must have a duty of care towards him. I hope that he gets the help he needs.

Will check out the new blog, too. Thanks for highlighting it.

God love him. He must be grieving as well, for his mom.I will also pray for him.