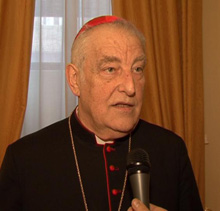 Various bloggers such as Mulier Fortis have noted with horror that the Catholic Education Service (CES), far from having opposed the Government's plans to enforce sex and relationship education on Catholic Schools, limiting their ability to teach the fullness of the Catholic Faith to children in their care. Following a little browsing on the internet, I've discovered that the man to write to is pictured above. Cardinal Zenon Grocholewski is the curia for the Congregation for Catholic Education. You can click here for the Vatican webpage for the Congregation for Catholic Education.

It is interesting to note that the Cardinal himself warned in Feburary of this year of the disturbing trends among policy makers to impose secular-based education on religious schools. Zenit. On February 19th 2009, the Catholic news information website reported that new religious diversity laws in Canada would make teaching the Catholic Faith problematic in Catholic Schools.

Now, while it may be that the Cardinal would be gravely disappointed, if perhaps unsurprised by the UK Government's latest move, His Eminence would be horrified to learn that the CES appear to have spearheaded Ed Ball's initiative. It is particularly important that the Cardinal learns of this scandal before the Ad Limina visit, a 5-yearly visit to the threshold of the Apostles (ad limina Apostolorum) of the Bishops of England and Wales to Rome in January. This visit makes the Bishops accountable to Rome for their actions in regard to the health of the Catholic Church in England and Wales. If the Bishops of England and Wales, who have yet to make a formal announcement on this matter, and who have yet to condemn the plan are guilty of not opposing vehemently and steadfastly the Government's initiative, then it would amount to a betrayal of Catholic parents. James Preece of 'Catholic and Loving It!' has written boldly on this subject and writes as a concerned Catholic parent who feels severely let down by the Catholic hierarchy. Meanwhile, Fr Tim Finegan of The Hermeneutic of Continuity has written on the potential options of homeschooling in the wake of this disasterous policy commitment by what seemingly appears a deeply anti-Catholic Labour Government.

Here is a letter outlining the main concerns of these developments to the Cardinal.

According to Her Majesty’s Secretary of State for Education, the Catholic Education Service of England and Wales was, “part of a group which recommended to me that we should make this statutory, that we do have sex and relationships education for all children and young people, in all our schools, with parental opt out which I am reducing today with the support of the vast majority of faith schools."

The Catholic Education Service issued a press release on the 5th November in response to the development, stating that: ‘The Catholic Education Service for England and Wales (CESEW) believes that Personal, Social, Health and Economic education (PSHE) is vital in the education of young people. It enables factual information from reliable sources to be communicated and misinformation from peers or street culture or exploitation to be avoided ... As age and growing independence brings young people ever closer to pressures, advertising and coercion to behaviour which can undermine the healthy life of young people, we are comforted in the knowledge that our schools and colleges will do an exceptional job in providing Sex and Relationships Education, set within the teachings of the Catholic Church.’

I find secular sex education difficult to reconcile with Catholic teaching in any circumstances and I would like to learn the opinion of the Dicastery. Am I right to expect the CESEW to oppose the sexualisation of children with rather more determination than it has exhibited to date?

I remain, most Eminent Lord, the Holy Father’s most humble and obedient son.