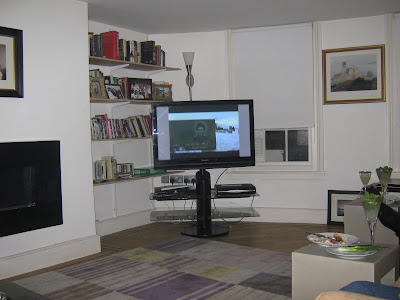 Last night was witness to an evening of food, chat and visual entertainment at Des's, a fellow parishioner who has been putting on film nights for a while now. Last night was Vodka Lemon, a charming little armenian flick about widows. Just to prove that people were there, here is a picture of some of those people. I think it made about £60-£70 for the Building Fund of the Church and though I am skint, I popped out to St James's Street for half an hour or so after the film to earn a fiver for my necessities as I'm a bit broke at the moment. Thank you, good people of Brighton! I'm trying to learn the lyrics to 'I Will Survive' at the moment by Gloria Gaynor so that I can hang around outside the gay bars and cash in on the pink pound while people come out and go in. 'First I was afraid, I was Petrified...' Chords are Am, Dm, G, C, Am, Dm, Em, F, C. With Christmas coming up, I've suggested the Choir take to the streets with some kick-ass Gregorian chant, dressed in Santa outfits.

It was a lovely evening of food, film and good old conversation about Catholics things like Angels, Free Will, the Devil, God, Saints, man's dignity made in the Image and Likeness of God etc...I'd like to start something up at my eco-flat but am unsure. Chess Club would be good but I don't really have that much room for tables and the like. I dunno, I can learn a load of songs and get people up for karaoke...I interviewed a parshioner of St Mary Magdalen's today on her life story which actually is quite incredible. If I can edit it I'll post it. The lady in blue in the picture below... 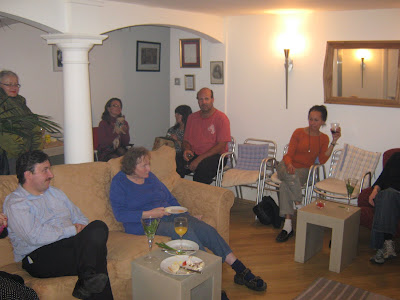 I was drawn to the lady in blue in the photograph, before I read your post. She looks holy, whatever that means. It will be interesting to hear her story,

if you get the chance to suggest a film - go for 'happy times [hotel]'
it's a simple chinese film but one of the most beautiful films ever made and it will truly break your heart...