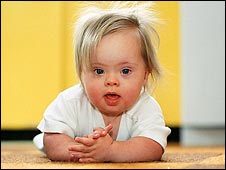 You can follow the link above to read the full story. I am a bit annoyed that the Chief Executive of the Down's Syndrome Association sounds a bit weak on defending the right to life of sufferers.

Scientists say they have developed a safer blood test that can tell a women if her unborn baby has Down's syndrome.

Carol Boys, chief executive of the Down's Syndrome Association, said: "There is no question that these non-invasive tests will be introduced in the next few years.

"It's therefore incredibly important that potential parents are given accurate information on Down's syndrome before they make a choice about whether to terminate or not.

"The more informed parents are, the better the position they are in to make the choice that is right for them."

Err...Hang on. What the Chief Executive is saying is, "We don't consider Down's syndrome a reason for termination"...but if you do that's fine. I mean as the national voice of Down's Syndrome Sufferers, who are we to tell you not to kill them before they are born?

"Bringing up a child with Down's syndrome isn't right for everyone". So, you give your tacit consent to the killing of the babies who are unfortunate enough to have parents who decide bringing up a Down's child is not right for them.