And Who Better to Lend Theological Weight to My Point? 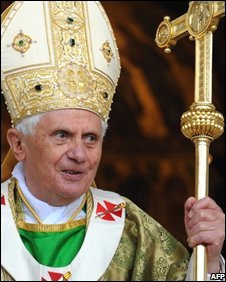 Currently traders and stockbrokers are crying out, "Sell! Sell! Sell!" in bitterness and desperation. When what they should be crying is, "Sell! Sell! Sell your treasures and give the money to the poor! Then you shall have treasure in Heaven!"

Pope Benedict XVI tells it as it is:

The global financial crisis is proof that the pursuit of money and success is pointless, Pope Benedict XVI has told a meeting of bishops in Rome.

The head of the Roman Catholic Church said that the disappearance of money as banks collapsed showed that wealth meant "nothing".

The Pope said that people should instead base their lives on God's word.

Those who think that "concrete things we can touch are the surest reality" are deceiving themselves, he said.

The crisis in the financial industry has seen billions of dollars wiped off the value of shares, and a number of seemingly untouchable banking institutions have been taken over, nationalised, or have collapsed.

Speaking to the bishops assembled at the Vatican, Pope Benedict said those who seek "success, career or money are building on sand".

When he opened the Synod on Sunday, the Pope attacked modern culture, saying that "nations once rich in faith and vocations are losing their own identity under the harmful and destructive influence of a certain modern culture".
at October 06, 2008