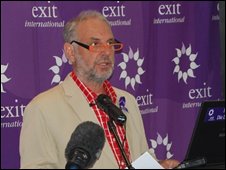 From the beloved BBC:

How charming! Suicide workshops! Well, I suppose pottery isn't for everyone.

Australian euthanasia expert Dr Philip Nitschke says there is now enough support in the UK for his organisation Exit International to have a permanent presence here.

"When elderly people know they have prepared for potentially ending their life, then it gives them a better quality of life, they stop worrying and sometimes they even live longer."

Dr Philip Nitschke is in London to promote Exit International, a voluntary euthanasia information and advocacy group, andhas not had a smooth time since coming over from his native Australia.

Two of his suicide workshops in Dorset were cancelled after the venues pulled out.

But he insists there is enough UK interest in Exit International's work to allow a "chapter" of the organisation to be opened up shortly in London.

A public event was held by Exit International at Conway Hall in Holborn, central London, on Monday, to explain what it does - essentially giving people information on how to end their own lives.

It is illegal under the 1961 Suicide Act to aid, abet, counsel or procure the suicide of another, but Dr Nitschke held his event regardless.
at October 14, 2008