A while back I met a young man who I met in a bank. He had returned from Afghanistan after service in the Army for 12 years in Bosnia, Iraq, Afghanistan. I saw him later in the year and he was sleeping rough in the cold weather.

He had a drink problem and in the end, I believe, went back to his girlfriend and got himself onto an AA programme. I haven't seen him about since then. The day I met him, he told me what a shock to it was to come from the 'desert to the snow'. He spoke of how having since left the Army, he had lost his 'family' because in service, your family is the Army. He had seen good friends blown up, had been witness to things and probably been trained to do things and perhaps done things himself that would horrify us. Killing doesn't come naturally to us, nor does witnessing horrific injury and death inflicted upon others. We hear every week of another British serviceman who has been killed. Thousands more are severely injured in action.

Last night's Panorama, however, concentrated on the mental trauma, alcoholism, family break-ups and difficulties in returning to civilian life that ex-serviceman experience when they leave the forces. To survive Afghanistan is one thing, but how to survive the return to 'normal life' seems to be a much more difficult mental struggle for our men in the forces.

At 25:14 mins in the hour-long documentary, Colonel Tim Collins, who was in charge of the mission in Iraq, who really does exude a great deal of genuine sympathy, solidarity and compassion for the men who become 'lost' having left the forces, visits Brighton, where he meets Mark Morgan, a man still haunted by the Omagh bombing in Northern Ireland. He tells his story of how his mental collapse in the wake of the bombing, as a member of the British Army, led to mental illness, isolation from his family, alcoholism, homelessness, despair, crime and prison. 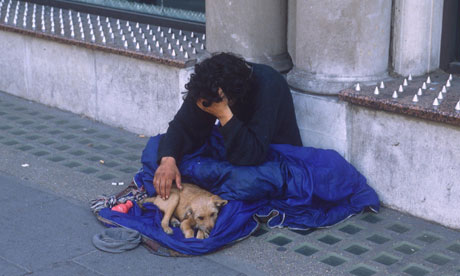 Mark was picked up eventually by the Royal British Legion who helped him get himself back on his feet after 8 years of homelessness and prison. Colonel Tim Collins meets him for a coffee and spends a night on the Western Road with him in a sleeping bag, totally exposed to the elements and to the passers-by at night, in the doorway of the disused 'Factory Shop', just 20 yards down the hill from St Mary Magdalen Church that joins Western Road, a shop that now remains vacant, disused. It is a life that Mark has now escaped and to which he never wants to return. Colonel Tim Collins concludes by challenging the Government on their inadequate response to the hundreds, possibly thousands of men who leave the army and who then abandoned to their memories.

The St Mary Magdalen Soup Run, managed with tirelessly self-sacrificing devotion by St Mary Magdalen parishioner, Karla Lena, is featured in the documentary. She tells Colonel Tim Collins about how regularly she sees ex-serviceman on the Soup Run. The most poignant quote in the documentary is that of one young man who says, "It takes 6 months to convert a man from a civilian into a soldier. Yet it takes no time at all, the MOD believe, to turn a soldier into a civilian." Another interesting quote was from the Brighton man, Mark, who said that if the Council had given him support with housing on his return from duty, and he hadn't found himself either without a 'local connection' or found himself dumped at the bottom of the housing list as a single man, then his story over the last eight years might have been a little different.
at February 10, 2011

Good that you have highlit this Tweeting now.