Dominic Scarborough has written an excellent piece in this month's Mass of Ages, the magazine of the Latin Mass Society. In it he highlights the truculence, grounded more in fear more than anything else, of many Bishops and Priests, in the wake of Summorum Pontificum.

Dominic first dissects the fall out from the 'New Catholicism' propagated in the wake of Vatican II, which 'disavowed the styles of the past and the pre-Concilliar mindset and embraced a Protestant understanding of the Church as a purely human institution best with error best correctable by a rediscovery of primitive Church and Scripture.'

The really interesting part of the article is as Dominic goes on to suggest why those who embraced 'New Catholicism' and who treated the Second Vatican Council as a total break with the Church's tradition are genuinely horrified by the liberation of traditional liturgy, devotion, fidelity to the Successor of St Peter and loyalty to the Magisterium that has been exemplified by, among others, blogging Priests. Speaking of Bishops who are not falling over each other to implement Summorum Pontificum generously, Dominic says...

'Acceptance of a new system always requires the defamation of the old to stand any chance of success. Consequently they fear that Catholics attending the Traditional Mass for the first time will find themselves being drawn to it and having to realign their attitudes to the Mass as to start questioning the way Mass is typically celebrated in the Novus Ordo. Thus they must do everything to stop the Old Mass becoming a feature of Catholic life again because it will remind Catholics, including themselves, of what they are meant to believe. It will highlight the gulf which has opened up in the last forty years between the 'old Faith' and the New Catholicism and how misleading much of the propaganda against Tradition has been.'

'It would appear however that the guardians of the New Catholicism are now seeing the fruit of Tradition and it represents everything they feared.  This fruit is the young people, both married couples and young Catholic singles, who have decided to live in a radical and counter-cultural life which frequently involves Traditional Catholic devotions and the Traditional Latin Mass. Their Catholicism has recently been described as "Radical Orthodoxy" - the attempt to live out completely the Catholic Faith of the Catechism in the twenty first century. They have no formal umbrella organisation or spokesmen but tend to know each other through sympathetic priests, assisting at the Traditional Mass, and by attending conferences and events focusing on the family as well as Traditional devotional gatherings and pilgrimages. Many are distinctly 'blue collar' and quite a few are exploring a vocation in one of the numerous new religious orders and communities whose formation houses are full to bursting. Some are active bloggers, members of the so-called "Catholic Taliban" which is doing so much to expose the intellectual and moral bankruptcy of dissenting Catholicism.'

So now I have a deeper understanding of why I am on the receiving end of some very angry comments. See a couple of posts below for the evidence. Anyway, getting to the heart of the matter, why, Dominic, do 'NuChurch' get concerned by the rising popularity of the Traditional Latin Mass? Dominic says it is because...

'Radical Orthodoxy is about defiance of an increasingly authoritarian and anti-Christian society and deliberately presents the symbols and practices of Traditional Catholic liturgy as signs not of the Church's secular power but of God's transcendence and Christ's universal kingship that desires an obedience of love in every aspect of life from human fertility to social relations. This determined adherence to the transcendent and the supernatural is intended to act as a guide to, and not merely be the reflection of, the Godless society around it. It does this precisely by appropriating the signs and practices of bygone ages which are no longer intelligible to people today as expressions of secular power. This is done to reinforce the notion that "My kingdom is not of this world" and not to pretend that it is. It also has the important role, as all tradition must, of remaking itself anew to ensure the safeguarding of Christian civilisation against a new barbarism which seeks to worship man rather than God...'

Thank you, Dominic, for a great article. I think that this is really the key. The Traditional Latin Mass manages to convey Catholic Truth and the thing about Catholic truth is that it is often unpalatable because we are involved in a spiritual battle. The traditional liturgy suggests that there is a battle going on between good and evil, that God exists, that the Devil exists, that Hell, Heaven and Purgatory exist, that there are Saints and there are sinners, that we are sinners, that we need Divine Help, that the fully Divine, fully human, Saviour, the Lord Jesus Christ is truly sacrificed upon the Altar, that we are at Calvary and that He gives Himself to us under the guise of bread. It reminds us that we are beggars before the Throne of God, not the architects of the Church's reform in our own image. The reason that the Devil and lots of 'NuChurch' types are worried, the reason why those who have embraced traditional liturgy are now the 'scourge of the Church' is because the one thing the Devil does not want God's children to know is that we need Salvation!

I'll admit I can be arrogant and proud at times, but, for those who are angered by my recent posts, I would ask you one question - who is the really arrogant one? Is it the one who defends what the Church teaches or the one who sets himself obstinately against the Magisterium of the Church founded by Christ upon St Peter and the Apostles and dissents from that very teaching that they as Catholics have a moral duty to pass on to their children and to others, not only dissenting themselves but encouraging others to do so, while attacking those who do defend it zealously? In other words. Who do you trust? Your opinion or the Church's opinion? Your view of that of Christ's Church? To whom has Truth been revealed? To you, or to God's One, Holy, Catholic and Apostolic Church?

And you say that I am arrogant... 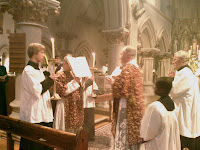 An article by Fr Sean Finnegan also appears in the LMS Mass of Ages magazine this month entitled Hands Across the Divide, discussing his thoughts on 'an encouraging picture of rapprochement between those attached to Old and new.' You can read the article here.

You can buy the LMS Mass of Ages magazine by clicking here.
at February 08, 2011

''Protestant understanding of the Church as a purely human institution...''

This is a heretical assertion! the church's understanding of itself can never be protestant because the magsterium is guided and guarded by the holy spirit. Oh and the church's magesterium also includes the teaching pronoicements of the second vatican council eg the DOGMATIC constitution on the church.

There you go hijacking VII for your own ends again.

To be fair Laurence, Dominic Scarborough makes a few sweeping statements that you have made repeatedly on this blog. It's not like he has 'given you a deeper understanding' - all of his observations have already been made by you and a legion of other Catholic bloggers ('worship man rather than god', 'refuse to "liberate" the Latin mass that I don't understand', 'open to the World' yawn, yawn yawn)

Not just Catholic bloggers. I think that Bishop Athanasius Schneider made similar references in his recent speech.

Excuse me, I have read the documents of the second vatican council on a number of occasions actually which is why i feel confident enough to pull you up on your unfounded claims about them.

The documents also constitute part of the church's teaching magesterium - the clue is in some of the titles eg the DOGMATIC CONSTITUTION on the church etc. At least 2, and probably 4 of the documents are considered authorative. If you don't accept them, you're being protestant.

You still haven't answered my point, you claim that Vatican II promotes a protestant understanding of the church as a purely human institution. Apart from being inaccurate and plain wrong (have you actually read the documents yourself?), how is this not a heretical assertion more akin to protestantism?

I have also skim read much of Bishop Athanasius Schneider's book and to be honest i don't rate it much. It's not very convincing, from a theology point of view. He doesn't base his arguments in theology, he doesn't discuss theology at all really. It is at most based on personal experience of devotion. There are mostly folk lore stories and romantisim but nothing more substantial.

No, I did not claim that Vatican II does that. I would claim, as do many others, that the 'spirit of Vatican II' ushered in some Protestant trends which were not necessarily intended by the Council Fathers.

But Laurence, the abrogation of VII is based on your personal dislike of it. You have no authority to dislike anything the Church promulgates and still call yourself a Catholic. You're as bad as the dissenting liberals. If you're Catholic you're not at liberty to dissent as and when you feel like it (and even appeals to the HF are not enough here, until VII is repealed you are expressing opinions contrary to Church law)

You (pre)judge others to be a heretic. A superficial judgment of another Catholic as a “heretic” not only cheapens the notion of heresy. A summary judgment of a brother or sister as a heretic betrays an absolute objectification of another person’s courage and conviction. Now, any statement of conviction that’s not to another person’s liking is “heresy”. This is a dark shadow of Catholic traditionalism: the rigidly “orthodox” distort a truly orthodox notion of Magisterium with private and simplistic so-called “magisterial” statements.

It has been very well documented by senior members of the Church that much of what takes place within the Novus Ordo was NEVER made licit by any of the Vatican II documents.

For example, can someone please pass me the VII document that called for 'liturgical dancers'?