Pray for the Repose of the Soul of Dominic Mary 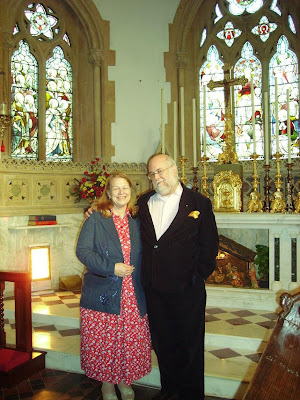 Quite recently it struck me that at some point one of the English speaking Catholic blogging community is going to die.

I don't mean this in a 'prophetic' sense, since we are all going to die, but that one day we would hear news of it and be greatly saddened.


Mulier Fortis today posts on the death of Dominic Mary, a Catholic blogger who died of a terminal brain tumour.

Remember him in your prayers. I'm pretty sure I met him once when he came to St Mary Magdalen's.

Gem of the Ocean, with whom Libera Me fell in love and to whom he was married has more news of the sad passing of a fellow Catholic blogger. Pray for him and pray also for her. Gem courageously cared for Dominic during the last months of his life in what can only have been a period of bodily suffering for him. Gem says...

'There doesn't seem like there's much for me to celebrate this year.  But there is.  I had Q for exactly a year and a day.  Never once did Q complain of having the cancer.  He'd get frustrated because he had a harder and harder time communicating.  Nominative aphasia, they called it.  I think I got to be with a saint in the making, and I thank God for that gift.'

Looking at Dominic's profile, it seems he also set up the blog site for the Sodality of St Tarcisius, the LMS's society for altar servers dedicated to learning and serving the Traditional Latin Mass, as well as a blog dedicated to encouraging the Laity to say the Divine Office, entitled re: The Divine Office. Ironically, the latest post on the Sodality of St Tarcisius is on praying for the living and the dead as members of the Society.

Prayer for the Living and the Dead

Almighty and everlasting God, who hast dominion over both the living and the dead, and hast mercy on all whom Thou foreknowest shall be Thine by faith and works: we humbly beseech Thee that all for whom we have resolved to make supplication, whether the present world still holds them in the flesh, or the world to come has already received them out of the body, may, through the intercession of all Thy saints, obtain of Thy goodness and clemency pardon for all their sins.
(Collect Pro Vivis et Defunctis, Roman Missal)

May angels lead you into paradise; upon your arrival, may the martyrs receive you and lead you to the holy city of Jerusalem. May the ranks of angels receive you, and with Lazarus, the poor man, may you have eternal rest.

I get the distinct impression from his blog that if you are going to pray for him, he would like your prayers to be in Latin. Requiescat in pace.
at November 24, 2011

Email ThisBlogThis!Share to TwitterShare to FacebookShare to Pinterest
Labels: Dominic Mary, Libera Me

Just so. Many thanks for the post. BTW, I hope to get down to Brighton soon for a Mass. I was going to come up this week, but Fr. Blake had problems. One of our regrets was that we never got to go down together to see Fr. Blake. Q was already ailing late Nov. and all through December last year, so it was a rather quiet season. He was diagnosed Jan. and then started his radiochemo in the 3rd week of Feb. It was very hard to watch his condition deteriorate. There were a few times he'd rally. For instance end of June he did get two days at Henley - which he adored (sadly I was sick then and couldn't take him myself -- it was something we'd looked forward to) -- but we DID get one glorious English summer day at Henley, for some day races about a month after the annual Regatta. Q was in his glory amongst his friends. It was only a few short weeks later that he finally could no longer safely stand to get in the car himself, or stand even in the apartment without danger of falling. But for our time together, we were blessed.

My sincere condolences to gemoftheocean. I will say a Rosary for you and the repose of his soul.

The latest post on the SST blog is now a notice of Dominic Mary's death. Would all members please pray for his soul. I will be saying the Office for the Dead in the traditional Dominican form for him.