I write while listening to an Elvis cover of Hey Jude which is, by all accounts, a little ropey. Incidentally, I don't think the Elvis version is an improvement on the original Gerry and the Pacemaker's version, but hey, it's 'the king', isn't it?

I promised a little reportage from yesterday's meeting of bloggers at Hinsley Hall, Westminster Cathedral.  By all accounts, it was a success. So far, a group of bloggers has met and got on really rather well.  An Our Father and prayers to Our Lady of Walsingham and Blessed Pope John Paul II got the meeting under way. During a two-hour discussion much was said about the potential for Catholic bloggers to come together to form a society. Among others, including the excellent Linen on the Hedgrow, On the Side of the Angels, who it was a delight to finally meet in person after quite some time of interaction on comments boards on The Telegraph blogs was on good form and A Reluctant Sinner chaired the meeting with dignified grace and charity, also giving us a tour of the crypt of the Cathedral, where much loved Cardinals are entombed.  Above all, there was a great spirit of enthusiasm and shared passion for forming a 'coalition of the willing' in order to fight the good fight.

So, the idea came about to see if we can form some kind of a shared blog in which we can pool our talents, knowledge and reflections on the Catholic Faith. Different bloggers bring something different to the table. One chap, for instance, who runs a blog called E-Church, is coming over from the Anglican communion to the Catholic Church. Another writes on political matters in a Catholic perspective and another is the blogger for the St Paul's bookstore company in the United Kingdom. Thoughts on an Oasis of French Catholicism was represented by the lady with whom I enjoyed lunch in what appears to be a more upmarket McDonalds (or haven't I been there in ages?).

All in all, this is a project that could bring into 'one fold' several different blogging sheep, united in the common bond of the Catholic Faith, all determined to defend the Magisterium and the Supreme Pontiff. It was suggested that the blog would be simple in as much as it will simply teach the Catholic Faith - an evangelical mission using the internet to propagate the Faith.

The shared blog would be an independent mission seeking only to raise awareness and educate those within and without the Church in the Faith. This blog would steer clear of some of the more controversial disputes within the Church, steer clear of polemics even, and simply reflect that Deposit of Faith guarded by Pope Benedict XVI and taught by Bishops loyal to him.  It's great strength is that it is a grassroots blogging movement, that membership is free, that nobody is paid, but that we are all contributing to a new and exciting blog that will reflect the array of Catholic blogging talent that exists in the Church in the United Kingdom. We were even fortunate to have a Priest who would offer Mass for the Guild's intentions for free. The idea of a general blog into which members can contribute is also able to hopefully reassure contributing bloggers that the 'fiery' content of their own blog is under no threat and that those issues close to the heart of Catholic bloggers can still be 'tub-thumped' on their blog - but that the shared blog would be a mission to unite those bloggers loyal to Pope Benedict XVI and the Magisterium under one roof in communicating the One True Faith.

Mulier Fortis and Dolphinarium joined us after the meeting for 'further discussion' in a nearby boozer. It was a truly memorable day. It was mentioned by one or two people that blogging can be something of an isolating experience and that the chance to put faces to names and meet other bloggers united in the Faith was something really quite special. It reminded us that we really are not alone in the battle (and let's face it, it is a battle) to communicate the Catholic Faith in its fullness and entirety. It was agreed that we all had different 'campaigns' which are close to our hearts and that these should continue on our individual blogs.

With that in mind then, may I introduce you to Steve (I think it was Steve - I met quite a few people that day and am not that great with names on the best of days!). He was outside McDonalds in Westminster with an excellent t-shirt condemning Westminster City Council's byelaw proposal. On the back it says, "Westminster City Council: Be afraid, be very afraid!" See! I told you the homeless don't need spokespersons! They can speak for themselves! He said the proposed bye law, was "a total denial of human rights of the homeless and those who care for them". Sounds pretty on the mark to me. It's a real shame no journalist quoted him at the time of the controversy. 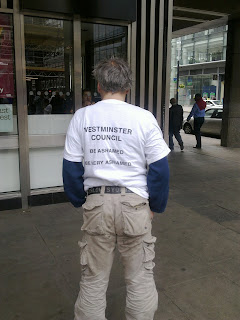 Click on images to enlarge. I wondered where he got this t-shirt from? I asked him and he said it was a charity of some sort. It is naive to think WCC will let this drop, so maybe its a good idea to get some in stock ready for their next attempt to persecute the homeless of Westminster.

I understand that some of us, as bloggers, are considered a little too "mad, bad, rad, trad and/or dangerous to know". It seems such a shame for the Church not to utilise the passion for the Gospel of so many who spend hours writing and defending the Faith. Hopefully, our efforts will be pooled in a way in which distinctly Catholic voices can unite in chorus in order to make Christ and His Holy Church more widely known and more deeply loved.

For the bloggers who attended in full, the links to their blogs and a more detailed account of the day, read A Reluctant Sinner. The 'Guild of Catholic Bloggers' is still and will be for perhaps as long as it goes, a work in progress. More meetings and discussions are needed in order for us to put flesh on the bones, so to speak. No pun intended. By the way, I read a good article in St Anthony's Messenger from the Basillica of St Anthony today by one Mr Austen Ivereigh, concerning the new film, There Be Dragons, about the life of St Josemaria Escriva. The article was really good, but I couldn't understand why the article had a picture of the director (of 'The Mission' fame) and producer of the movie...with Austen in the middle. What's Austen got to do with the movie, again? Anyone? I think James Preece might have the the answer. Poor lamb.
at May 08, 2011

Truly a great day - and I can say before Our Lord, His Blessed Mother and all the Saints that it was an overwhelming grace and pleasure to encounter my [longterm] brothers and sisters in the blogosphere.

Want to say so much - but for the time being I'll leave it to the reader with a tagline that Laurence is everything one could possibly hope for in a Catholic blogger - and more! You fall in love with his soul within seconds. He's inspirational [but don't tell him I said that!]

Love you too Bro! Christ will give us the victory!

I understand that some of us, as bloggers, are considered a little too "mad, bad, rad, trad and/or dangerous to know".

Pardon me but by whom? Sounds more as if they might be the ones who are “mad, etc” with the exception of “trad”.

We readers could spend an interesting hour or two trying to put names to the people in the photo. You could even run a competition to see who can correctly identify most of the faces but I suspect that people south of Watford might be at an advantage. Perhaps you could tell us who they all are.

It was really nice to meet you, you're such a kind-hearted person and a good witness to the Gospel of Love.

Thanks for your report on the meeting, which was, as ever, a joy to read.

Nice to meet you, too, Paul! What a good time in the pub afterwards!

Hope to see you again soon.

May God be praised that this sinner has been graced.

I'm a bit tired. Can you answer Mike's question as to the bloggers from left to right, blogging names only, as I'm not sure all wish to be named?

sure : From L-R
Fr Samuel Medley [various blogs]
Laurence [there'll always be an] England
Moi
A Brief Encounter
Our Way of Light
eChurch
St Paul's blog
Linen on the Hedgerow
A Reluctant Sinner
Liz McKernan representing 'Thoughts from a Catholic Oasis' blog [whose author is in France]

Sounds like a great time had at the pub yesterday. Gutted I missed it.

Sorry I missed the pub end of things!
A good account Laurence.