Look Who's Been Shopping in the January Sales... 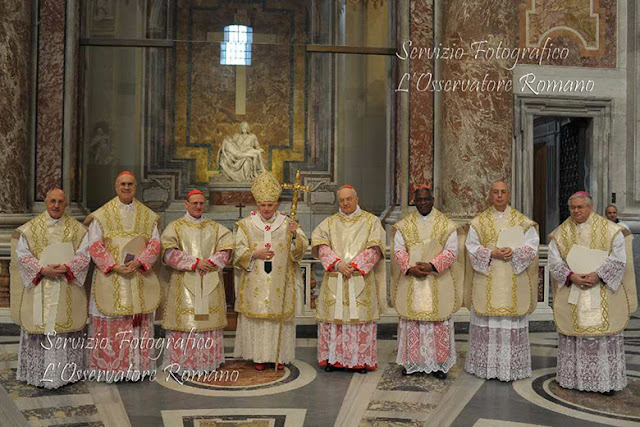 Money well spent! You know what they say...When in Rome...

Image courtesy of New Liturgical Movement, where you will find more great pictures.
at January 04, 2011

I know we should have good quality for the liturgy, and spending a bit more on quality means these vestments will last long after the priest wearing them has passed away. I understand that beauty in the litugy is a reflection of the inner beauty of the reality CHrist's sacrifice and God's glory.

However, a lot of the time I just can't make myself believe what I just said above. Rather I beleive it, but I can't justify to myself the considerably spending on vestments in the face of the hard reality of poverty, although you clearly have more experience of these things.

I think of the deacon St. Lawrence presenting the real treasures of the Church to the Roman governor -the poor.

Or St. John Chrysostom's compassion and practical help for the poor, which was a key theme throughout his preaching and writing, even intergrating it into his writings on marriage.

Again, St. Bernard, who's love of poverty lead him to have very simple churches and vestments for Mass.

We also have the examples of St. John Vianney, Pius X when still a simple county priest, and Karol Wojtyla when priest and bishop, though these were poor in the private lives, I don't know about their spending on vestments.

Or the Masses offered by priests and bishops in PoW camps, with nothing but the rags they had on, and a drop of wine in the palm of their hand for a chalice. These are so moving, and offer a strong witness.

I recently went through a powerpoint presentation which listed the cost for a bishop to be vested for EF Mass - the white shoes, gloves, several layers of vestments, mitre etc. It was a huge amount of money. The top tailors for clerical garb, such as Barbiconi charge large amounts of money.

I know, this reminds me of Judas saying the woman who poured expensive oil over Christ's feet could have sold the perfumed oil and given the money to the poor.

It also seems that the lavish spending is part and parcel of the mor traditioally minded clergy. Lots is spent on cassocks, birettas etc. The argument is made that it will alst longer, and maintains the dignity of the priesthood. But, this does not wash with me.

Anyway, if you have time I'd like to know how you square things?

Remember St Lawrence the Deacon only starts giving the chalices and relics and vintage plonk to the Poor because the Church is under persecution by Valerian - this was in order to safeguard the Church's 'earthly' treasures.

If the Church weren't about to be crushed, he wouldn't have distributed these items in such a way. Then he gathers the Poor and presents them to Valerian as the true treasures of the Church.

In other words, he wouldn't have had a problem with the money spent on the Church's liturgy to the Glory of God - just when all of that was about to be crushed by the Roman governor, he showed him the true riches of the Church - Her humble Poor - in whom Christ is present in a special way.

Secondly, we think that beautiful vestments are bought for the Priests to wear, yet they are worn only in Mass. So, the Priest is adorned and dressed in finery - but only because he is Alter Christus - another Christ, because he takes the place of Christ in the Mass.

Therefore, he reflects Christ's radiance and splendour. When everything is done to the Glory of God, especially in the Mass, then there are many graces for us.

The upshot of beautiful vestments and a beautiful, ornate Church is that the Poor, who live often in abject squalor, have somewhere where they can go and pray in the House of the Eternal King, in the Palace of God the Most High, the place where God dwells in the Sanctuary.

I met a couple who attended the soup run for a while and they both said they loved the Latin and the "beautiful Vestments". If you ask me, Vestments are for all of us to enjoy! If you think about it, there are no mirrors in Church, so the Priest can't even see what he is wearing! The only ones who can see him is the Church Triumphant and Militant.

In the olden days, before Protestantism infected the Church to the extent that it has, you can imagine that the Church's beauty and richness, and majesty, was the ONE AND ONLY place where the Poor could go and see beauty, richness and majesty. Then the Church wreckers came in and, boy, did they know how to make Churches less beautiful in the 1970s!

Well said Laurence. Apostolate of the laity mentions St Jean-Marie Vianney. I understand that he acquired the most beautiful of vestments in contrast to his everyday wear for the reasons you give. The vestments are on display in his presbytery in the village of Ars as are his much worn shoes. Yes he lived in poverty but when it came to being 'Alter Christus' he managed to wear the best he could find.