Happy Feast of the Epiphany 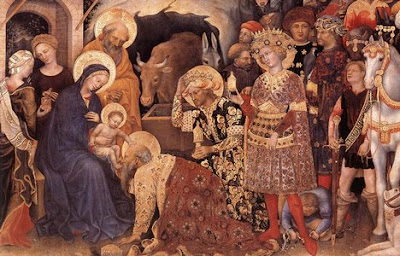 'And entering into the house, they found the child with Mary his mother, and falling down they adored him...'

Wise men indeed. According to the Gospel, none of them said, "I hear there is an indult which means that I can stand."

According to the Gospel, none of the Magi took out a flute, a drum and a guitar and started dancing around the Christ Child, while Our Blessed Lady clapped.

They didn't innovate, they just behaved as if they were in the Presence of God and upon 'falling down', they 'adored Him'. The wise men deserve recognition for remembering the incense as well. Our Blessed Lord loves incense.

"Note how fitting was the order of events: the wise men saw the star, were received by the Jews and their king; they heard prophecy to explain what had appeared; the angel instructed them; and then they journeyed from Jerusalem to Bethlehem by the guidance of the star. From all this we learn that this was not an ordinary star, for no other star has this capacity to guide, not merely to move but to beckon, to “go before them,” drawing and guiding them along their way. The star remained after bringing them to the place, in order that the child might also be seen. For there is nothing conspicuous about the place. The inn was ordinary. The mother was not celebrated or notable. The star was needed to manifest and illumine the lowly place, until they had reached their destination at the manger." [The Gospel of Matthew, Homily 7:3]