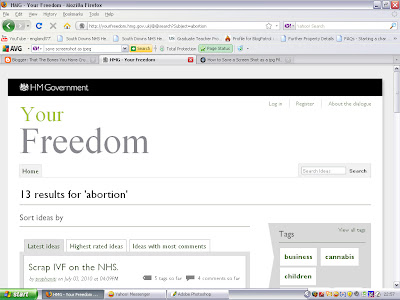 Your Freedom is HM Government's new way of convincing us that they are listening to the 'voice of the people'.

Apparently, the seemingly online scheme has been set up to allow the public to suggest that certain useless and even monsterous laws (and let's face it, the New Labour project certainly amassed a breathtaking number of them) get binned.

My suspicion is that they will castrate and hang paedophiles, especially 'those Catholic priest paedophiles' and imprison Pope Benedict XVI for 'Nazi youth war crimes', before thinking about banning abortion, IVF treatment, research on human embryos, civil partnerships and the withdrawing of nutrition and hydration under the Mental Capacity Act.

Still, some people have registered their horror at the continuing slaughter of the innocent and you can view the protest here.
at July 04, 2010