I was shown a CTS (Catholic Truth Society) leaflet the other day by someone who went into the CofE Church, St Bartholomew's, near London Road. It appears that the church have CTS leaflets about The Blessed Sacrament at the back of the Church.

They like traditional liturgy and having sacred music performed in their church every day and now it appears that they retain a healthy belief in the Real Presence, even though last I heard 99.9% of Anglican Orders are declared to be invalid.

The questions I had in my mind when I looked at the leaflet were; 'Why believe in one doctrine of Catholic Truth? Or indeed, why believe in a few? Is it just the doctrine of Papal Infallibility and Teaching Authority they don't get along with? Why have one leaflet at the back of the Church and not the full range, so to speak? Why protest at the Catholic Church on just the grounds of Papal Authority if you sincerely believe that Christ is truly present in the Eucharist, rather than it being a 'symbol'?'

The same Lord Jesus Christ that said, "This is My Body..." and "My flesh is real food...", said, "Thou art Peter and upon this rock I shall build My Church..." and prayed to His Heavenly Father, "That they all may be one.."

I know that history has given us quite a few translations of the Bible, thanks largely to Protestants, but then surely if anyone's words and testimony are true and credible it is those of Christ and His Apostles. Why believe some but not all? Why pick and choose aspects of Catholic Truth that you like and reject Catholic Truth that doesn't quite 'fit' with your worldview? It is either all true or it is all false, surely!? I suppose such questions were rife during the Reformation. Same debate, different century.

Damian Thompson has the latest on the 'wimmin bishops' crisis, a split so hazardous that the atomic discovery may yet pale in comparison. Here in the Catholic Church we don't do splits.

We do grudges which are much more fun. Look... 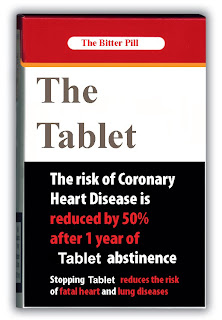 Still, you have to speak up when the Church established by God Himself has been infected with large numbers of Protestants in high places.
at July 11, 2010

"Here in the Catholic Church we don't do splits.

We do grudges which are much more fun"


Now that is funny... though sadly true.