The image of the name of Our Lord Jesus Christ, IHS. Obama and his gangsters had covered at Georgetown at a Catholic University.

The sign of 'progress'. Remember, Hitler, Stalin, Pol Pot, Castro and every other horrendous ideologue has had a vision of 'progress'. Usually it involved killing hundreds of thousands in order to achieve it.

This is how Hitler explained his plans to his nation, with the use of signs and symbols.

Crikey! The triangle is an occultist symbol. Hence the pyramid and 'all-seeing eye' which adorns the dollar and so much masonic symbolism. 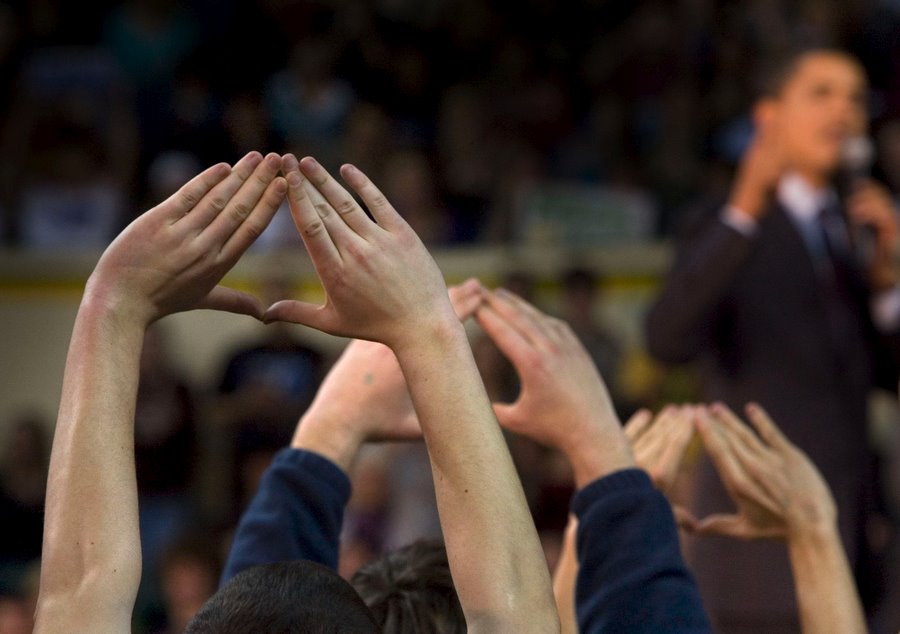 His supporters are cottoning on. Freaky and bizarre. Have they lost their minds?

Lucifer is described as the 'bright and morning star'. This symbol is straight out of an occult textbook. It has been borrowed from one Lucis Trust, formerly known as Lucifer Trust, set up by occult practitioner, Alice Bailey. They seem to be particularly influential in the UN, which is developing some pretty horrendous abortion legislation.

Lucifer is the 'light-bearer'. Obama's campaign imagery, especially on his website, has him bathed in bright, white light, and even Biden gets in on the celestial action. Oprah Winfrey, known for her new age enthusiasm, has described Obama as an 'evolved leader'. This is, according to many, a phrase lifted from the occult only to be applied to Obama. Disturbing.

The Lucis Trust wishes to see an invocation to 'the Christ', that is, not Our Blessed Lord, but to a new Christ/Messiah, under whom one world government, currency and hippy, new age communism will take place in the 'age of aquarius'. They are not harmless hippies, no, they are raging satanists. From their disconcerting website.

'There are comments on the World Wide Web claiming that the Lucis Trust was once called the Lucifer Trust. Such was never the case. However, for a brief period of two or three years in the early 1920’s, when Alice and Foster Bailey were beginning to publish the books published under her name, they named their fledgling publishing company “Lucifer Publishing Company”. By 1925 the name was changed to Lucis Publishing Company and has remained so ever since. Both “Lucifer” and “Lucis” come from the same word root, lucis being the Latin generative case meaning of light. The Baileys' reasons for choosing the original name are not known to us, but we can only surmise that they, like the great teacher H.P. Blavatsky, for whom they had enormous respect, sought to elicit a deeper understanding of the sacrifice made by Lucifer. Alice and Foster Bailey were serious students and teachers of Theosophy, a spiritual tradition which views Lucifer as one of the solar Angels, those advanced Beings Who Theosophy says descended (thus “the fall”) from Venus to our planet eons ago to bring the principle of mind to what was then animal-man. In the theosophical perspective, the descent of these solar Angels was not a fall into sin or disgrace but rather an act of great sacrifice, as is suggested in the name “Lucifer” which means light-bearer.'

Oh! Well, that's okay then, isn't it!? A ringing endorsement of the fallen angels! The New Age Movement is highly, highly dubious and even more dangerous to souls, to humanity and to the Church.
at May 26, 2009